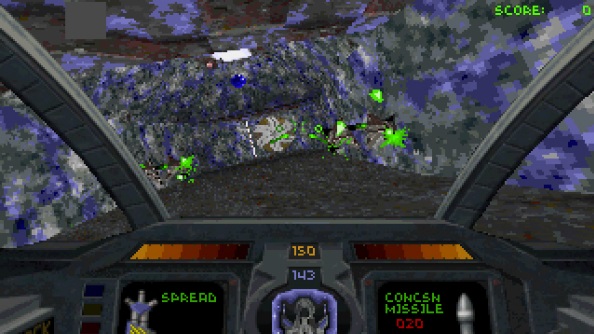 The sci-fi shooter Descent games have disappeared from GoG.com. It’s all down to a big dispute over royalties, which according to developer Parallax have not been paid since 2007.

The news of Descent disappearing from GoG comes just a day after Duke Nukem was announced to be leaving the online retailer.

Descent, Descent 2, Descent 3 and the Mercenary expansion have all been removed from the Good Old Games store. A post on the GoG forums explained that it was due to legal agreements: “Due to changing hands and in-flux legal agreements, we just had to remove Descent 1+2 & Descent 3 + Mercenary from our catalog, effective immediately,” a GOG representative said. “We do want to apologize for not being able to give everyone more of a heads-up, and we will be doing our best to bring them back.”

Clarification on the issue comes in the form of a letter from Descent developer Parallax Software, which was posted on the GoG forums too. Matt Toschlog and Mike Kulas explained that they had not been paid royalties by publisher Interplay since 2007, and that is in breach of the agreement they had.

“Parallax Software still exists and still owns the copyrights to the Descent games. Under our 21-year-old agreement, Interplay has the exclusive rights to sell Descent and Descent II, and they have been doing so on Good Old Games and Steam.

“The problem is that Interplay has not paid to Parallax any royalties since 2007. We’ve talked to them about this numerous times over the years, and finally took action this fall. We served Interplay official notice that they were in breach of the contract, and when they still failed to pay we terminated the agreement,” reads the letter.

“This means that Interplay has lost the right to sell the Descent games, which is why they came down from GOG. (We’re not sure why they’re still on Steam; they shouldn’t be.)

“Interplay does, however, still own the Descent trademark, which they are free to use or license as they see fit (such as for Descent: Underground) as long as they don’t violate our copyrights.

“As for whether Descent and Descent II will be available for purchase again, we hope so. We’d be very happy to work things out with Interplay.”

While this is certainly a more complicated arrangement than the Duke Nukem situation, hopefully Parallax will be able to come to an arrangement with Interplay and the games will return to sale on GoG. If your appetite suddenly has Descent on the menu, the game is still available on Steam. http://store.steampowered.com/app/273570/