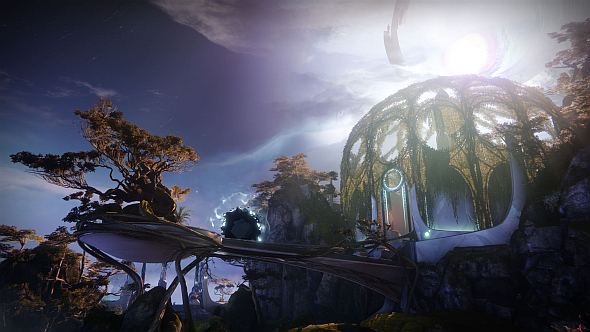 As expected, Destiny 2’s Forsaken expansion will add an all-new raid. Unexpectedly, Bungie took the chance to show quite a lot of it in tonight’s reveal stream – usually it keeps a tight lid on new raids until they actually launch. Perhaps the break in precedent has been prompted by Destiny 2’s struggles.

Whatever the reason, it’s all quite exciting. The new raid is called The Dreaming City, and will take us to the home of the Awoken people – a few quick shots depict a kind of cosmic Rivendell, with elegant buildings scattered among rocks floating in a purple void. Raid design lead Joe Blackburn promises it will have “more bosses than any raid we’ve ever had before.”

For more exciting adventures writ large, check out the best MMOs on PC.

On the reveal stream, Bungie devs compared The Dreaming City with The Taken King’s Dreadnaught and the Vault of Glass – the very first raid in the original Destiny, and still a fan favourite. We are promised lots of hidden corners and passageways, and intriguingly, we hear players will actually have an impact. Raiders will “change it for everyone” and the Dreaming City we see at launch won’t be the same as the one we see three weeks later.

As with most raids before their reveal, it’s not yet clear how the Dreaming City will interweave with the rest of Forsaken’s story. That will focus on a jailbreak from the Prison of Elders – a jail in the Reef that once held some of the solar system’s deadliest criminals.

With the Reef devastated after the events of Destiny 1’s Taken King expansion, it has fallen into lawlessness, and you’ll work closely with Cayde-6 to investigate the unrest. Perhaps some of them have gone so far as to invade the Dreaming City itself?