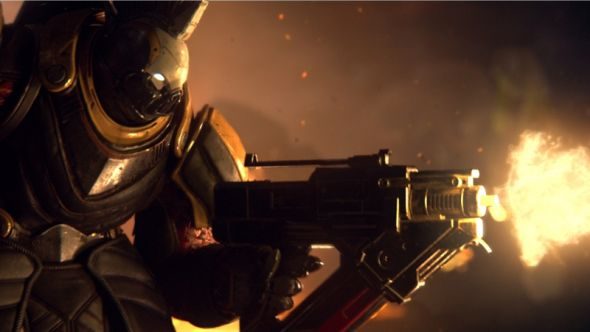 We’ve seen Destiny 2’s beginning and it’s quite bombastic. You, and however many friends you’ve managed to gather, will defend Destiny’s homebase of The Tower from the attacking bad guys, the Cabal.

The mission was shown during the Destiny 2 livestream, which is still ongoing below. This is the first glimpse of actual gameplay, and it’s mighty nice looking.

You begin as the ships arrive, with the dad of Destiny Zavala fighting alongside you. Running around madly, with a very familiar UI to those of you who have seen Destiny’s ultra-sleek trappings before, players fight the giant hulky Cabal troops as they push through the attackers.

There’s a lot more cinematic moments, many more characters actually communicating and fighting alongside you, as we wanted to see. Ghost is still chattering away, and while we’ve had no confirmation, it sounds an awful lot like Nolan North.

Eventually the player reaches a dark corridor and is introduced to Ghaul, the bad guy of the plot who has come here to take all our stuff. The bast. The trailer will doubtlessly by available online soon, and we’ll update when it is.