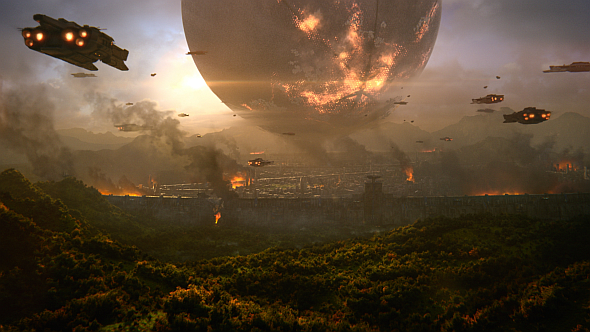 A new developer diary has released for Destiny 2, and this one’s talking story. Bungie say this is a tale about a group of superheroes being stripped of their powers, once again becoming scrappy underdogs instead of Crota-killing uber-gods.

Get up to speed on Destiny’s story with our handy primer at that link.

How have their powers been stripped? Well, this alien warlord turned up at the Tower – Earth’s last refuge – and put a clamp on the Traveller, that big sky sphere. Now it’s all clamped up, its Light – a stat-boosting magical property – can’t reach the Guardians.

Somehow that space-invading moon being all clamped up means everyone can’t even walk properly now. It’s a proper tear-jerker, by the sounds of it.

Once you can walk good, you then have to shoot things in the face until you’re a high level again. This needs a movie, in my humble opinion.

Luckily, even though the story sounds like complete tosh, the game is actually mostly about shooting things. The snippets of gameplay in the video above make that look rather good. The skyboxes are also very nice, and what more could you ask for really?