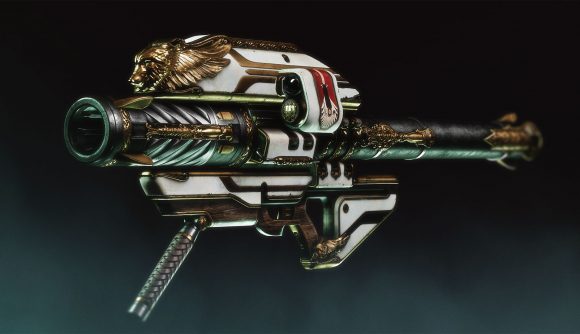 Gjallarhorn, probably the most (in)famous weapon in Destiny history, is returning to the series as part of Bungie’s 30th anniversary celebrations this December.

In a major showcase today, creative lead Tom Farnsworth announced “a party” inside Destiny 2 to celebrate the studio’s milestone. A “30th Anniversary Pack” will adda new pirate-themed dungeon to the game, from which Gjallarhorn will be obtained. Appropriately enough, this dungeon will be set in the infamous Loot Cave – a cave in the Cosmodrome which players would stand in front of in the early days of Destiny 1, shooting endlessly spawning monsters hoping for an Exotic to drop.

In yet more blasts from the past, fan-favourite Legendary weapons Eyasluna and 1,000-Yard Stare will return in the dungeon, which will also drop a new armour set inspired by Thorn (a spiky, chitonous Exotic hand gun). The 30th Anniversary Pack will also offer Bungie-themed ornaments and cosmetics, plus a new sword based on the Claymore from Myth. The Pack itself will presumably be an additional purchase, as Farnsworth contrasted it with a new six-player matchmade activity that will be free to all players as part of Bungie’s big party.

Gjallarhorn, if you didn’t know, was the most overpowered weapon throughout the first year of Destiny 1, as its seeking cluster bombs caused it to put out almost twice as much damage per second as any other rocket launcher. So potent was it that many raid teams wouldn’t admit anyone who didn’t have one, a problem compounded by its rarity – Destiny’s Exotic gear vendor, Xûr, hardly ever sold it, while streamers’ wails of relief upon getting it to drop became a whole thing on YouTube and Twitch.

Eventually Bungie sunset it for the game’s second year before bringing it back via a universally accessible quest in its third. At the showcase today, the developer was at pains to assure viewers that Gjallarhorn had been “carefully updated” for Destiny 2’s sandbox.

The return of the king.

The legendary Gjallarhorn returns this December in the 30th Anniversary Pack. pic.twitter.com/OusotyW7FW

There was plenty more news at Bungie-fest today, including a full discussion of Destiny 2’s next major expansion, The Witch Queen, of the new season which has just gone live, and of the roadmap for beyond Lightfall. Keep an eye on the site for the latest.