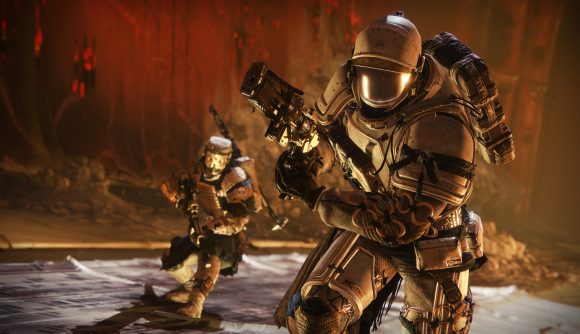 Destiny 2 has avoided the ubiquitous call of Twitch giveaways for long enough – Twitch Prime loot is on the way, and it looks like it’s going to keep coming for quite a while to come. The promotion was teased a little too early yesterday, and now dataminers have picked up the early details on every single piece of loot that’ll drop as part of the promotion.

Destiny 2’s Twitch Prime offerings will kick off on January 29 across all platforms. Items will be given away in packages of four, and giveaways will continue monthly for the next six months, for a total of 24 items. The items will include Exotic weapons alongside cosmetics like emotes, vehicles, and Ghost shells, some of which have been exclusive to the Eververse in the past.

Long-time players will likely already have all the weapons, and there’s nothing exclusive in the collection – though some of the cosmetics have been out of the Eververse rotation for ages. It appears likely that this promotion was actually supposed to go live yesterday, but Destiny’s temporarily inventory-destroying update seems to have delayed it slightly.

Here are all the #TwitchPrime loot items for #Destiny2. The first 4 items will be the first offering, after that each grouping for 4 will follow once a month for 6 months total. You'll pick them up from Amanda Holliday. https://t.co/J6Hhbpwsan pic.twitter.com/Bhj0BjQuEC

Datamines have also given us an early preview of Destiny 2: Season of the Worthy, and it looks like season ten will finally be the point where Trials makes its long-awaited return.