Update August 16, 2017: Bungie have commented, but some questions are still unanswered.

After Destiny 1’s microtransactions currency appeared on Steam, Bungie’s community manager David ‘DeeJ’ Dague has tweeted that it was an error, and reiterated that Destiny 2 is coming to PC exclusively through Blizzard’s newly renamed Battle.net.

Here’s everything we know about Destiny 2.

Here’s what DeeJ had to say:

Destiny transactions on Steam were made available in error. All purchases will be refunded manually by Valve. Sorry for the confusion!

It’s notable that DeeJ is admitting an error here rather than denying responsibility for putting Silver on Steam. This suggests it wasn’t a third party that put them up for testing purposes, which was an explanation that had been theorised. Obviously this raises the question: what were Bungie doing putting Silver on Steam in the first place? We’ve asked Activision.

We're with Blizzard. No plans to release Destiny 2 on PC anywhere else. Pass it on.

In this follow-up, DeeJ clearly reiterates Destiny 2’s exclusivity to Blizzard’s Battle.net, but there’s no mention of Destiny 1. Those who still want to see it come to Steam will no doubt cling to that.

Original story August 14, 2017:Destiny 1 is in the Steam database, and you can even buy its microtransactions currency… but that doesn’t mean it’s coming to PC.

It’s in SteamDB as Unknown App 347300. The game itself has no title, butyou can tell it’s Destiny because packs of Silver – Destiny’s real-money currency – are associated with it. SteamDB items are listed as ‘unknown’ when they are deleted or otherwise hidden to the public; unsurprisingly, attaching the ID number 347300 to a Steam store link just returns you to the storefront.

This isn’t the first time we’ve seen Steam listings for games that never made it to PC – the early Halo gamesare still discoverable in SteamDB.

We know that Bungie and Activision wereat least considering a PC releasefor the original Destiny. Silver was only introduced to the game in October 2015, so perhaps this indicates that a PC version was still being considered well into its life-cycle.

Clearly it hasn’t happened, and we doubt it’s going to happen any time soon – Destiny 2 is right around the corner and it’s coming on the Blizzard app, so we’d be pretty stunned if Activision decided to launch the original on Steam right now.

That said, it’s a little odd that the app’s record got an update just ten days ago, and what’s downright weird is that NeoGAFand Reddit users have been able to actually buy Silver. Here’s a screen from orichalcos: 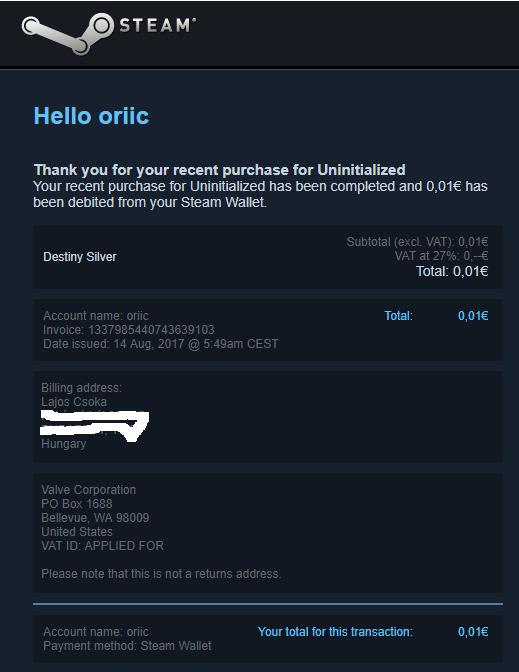 Weird, right? Cue arch comments about publisher greed for letting you buy microtransactions in a game that doesn’t exist, even if they’re only charging a cent.