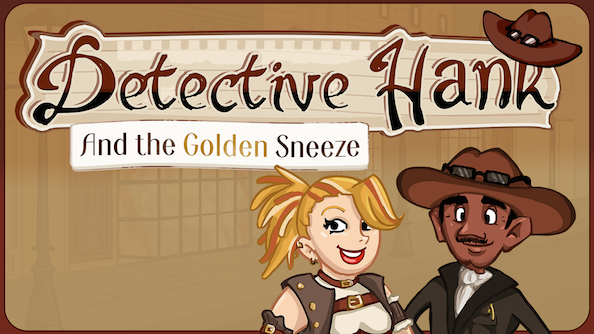 Detective Hank And The Golden Sneeze is a whodunnit visual-novel with more puns that it probably has room for. When the historic ‘Golden Sneeze’ is stolen from a museum, it’s up to you, Hank, to detain the perpetrator. But despite the whimsy, don’t expect the game to make it easy on you, with plenty of story twists that may influence the outcome, and nine possible endings to play through. After putting your detective skills to work and deducing the real culprit from a range of suspects, you prove your wit against them in court to bring justice to the Golden Sneeze. Obviously.

We’ve got 200 copies of this mystery visual-novel to give away, and all you need to do for a chance to win is enter via our widget below. We’ll also need your email, but not for anything fishy – we just need a way to contact you should you win a key!

If you’re successful you’ll be given a code to redeem on Steam. Just click the ‘Add A Game’ button at the bottom of the Steam client window, and ‘Activate a Product on Steam’. Follow the instructions, download the game, and get playing!

{"schema":{"page":{"content":{"headline":"Detective Hank And The Golden Sneeze giveaway! Win one of 200 copies of this steampunk mystery game!","type":"news","category":"detective-hank-and-the-golden-sneeze"},"user":{"loginstatus":false},"game":{"publisher":"Obsessive Science Games","genre":"Indie","title":"Detective Hank and the Golden Sneeze","genres":["Indie","Puzzle"]}}}}