Frozen in his animation, a Panamanian gangster skates towards me shooting. I taze the man, who should have gone to Sochi instead of taking up a life of crime, before ducking back into cover. Deus Ex: The Fall is a Deus Ex game – a first-person game that lets you shoot, sneak, or talk your way through its levels, upgrading your fleshy mortal limbs for flashy mechanical ones. But it’s not without its rough patches, and its mobile heritage doesn’t help.

This first episode sees you slip on the trenchcoat of Ben Saxon (figuratively speaking: he actually wears a vest), ex-Tyrant turned traitor. The Tyrants were the boss characters in Human Revolution. They take their name from the original Greek, referring to people who forged their own path and became leaders through merit, not lineage. They’re totally not evil. Honest. You’re hiding out in Panama and you’re running out of drugs.

Specifically, you’re running out of Neuropozyne – the meds that stop your body from rejecting its augmentations. This leads you to the backstreets of Panama to find a story of corporate corruption, and into scuffles with everyone from gangs, to the police, to paramilitary outfits. The Tyrants, who are definitely not evil to the core, try to execute you and everyone you come into contact with. So far so Deus Ex. 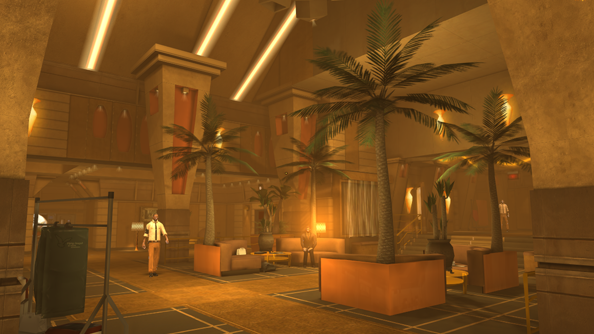 It’s more than the story, nFusion have the Human Revolution’s tropes down to pat – the screen is dripping in amber, you can upgrade your augmentations with Praxis points, and the environments are full of air ducts and hackable doors. Panama acts like one of the city hubs in Human Revolution, leaving you free to explore the streets and alleys to find secrets and side missions.

But the game was clearly made for mobile.

The Fall was released on iPad back in July, 2013 and it shows. There’s a small number of NPC character models and they’re used over and over throughout the game. The designers have done a lot with their limited resources – creating hotels, drugs dens, and research labs – but, without clutter, particularly in a city like Panama, they seem empty and lifeless. 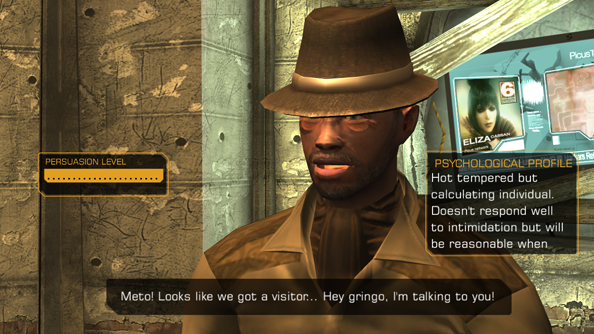 That sense of lifelessness extends to Saxon. It’s small things, like a lack of bob to your gun when you walk, which makes it more like controlling a gun strapped to a camera than a human.

In The Fall, NFusion have taken a scalpel to to Human Revolution’s template, collected together a pile of game meat – the essential giblets of a Deus Ex game – stitched it together and presented you with a serving. It’s recognisably Deus Ex but it’s not very appetising.

NFusion get an extra point for not including a single boss fight.