Deus Ex turns 18 this month – which means, in the UK, the game can legally get drunk. So let’s all have a beer or two. Or, if you’re protagonist Adam Jensen, have three, and wash them down with a few glasses of wine and a litre of whiskey. Deus Ex: Human Revolution – the third game in the series –  is littered with alcohol, which I didn’t realise until I started searching it out: there are cans stuffed in office drawers and bottles spread liberally across table tops, as if the developers were planning ahead for this milestone occasion.

Drinking gives you a health boost (in the game, I mean – but probably outside of it too) while also blurring your vision, and the stronger the drink, the less you can see. It’s not exactly suitable for a high-stakes security job, but Jensen is celebrating, so he’s taking a few drinks along to his missions. Good on him.

Deus Ex lets you be sneaky – but not as sneaky as the best stealth games on PC.

His first stop is Derelict Row, in Detroit, where Jensen must infiltrate a gang hideout. Some tough guys with guns are blocking the entrance, but Jensen has the confidence of two cans inside him, so he just drunkenly waltzes in unarmed. The gang hurls some abuse his way – something about killing him if he doesn’t leave – but by this point the beer has numbed his hearing. Then the alcohol wears off and, as if on cue, the gang opens fire. He’s a sitting duck.

Blending in didn’t work. So what about going in loud? And what’s louder than punching through a wall and breaking the neck of the guy on the other side? That works out despite the beer swishing around Jensen’s belly. He then makes a dent in the gang’s numbers by shooting at anything that looks like it’s moving (which, in his swaying state, is pretty much everything).

Jensen quickly runs out of bullets, and in the middle of a heated firefight is forced to pull out a sniper rifle. As well as blurring vision, alcohol zooms in the camera in Human Revolution, and when you add in the magnified scope of the sniper rifle it becomes impossible to make any shots. He goes down again.

As aiming is so difficult perhaps stealth is a better approach. After downing a bottle of wine, Jensen feels like he’s not making a sound. You know, like when you get home from a night out and close the door as quietly as you can, tip-toeing through the kitchen like a mouse (in reality, you’re waking the whole house up, stamping around covered in grease and putting a shaky finger to your lips to tell the bin to ‘shhh’).

It works well, at first. The alcohol gives Jensen the confidence to press on, and he cuts a path through a heavily-guarded area, managing to stay just out of sight. But then he turns a corner straight into a couple of guards. He should’ve stayed in cover. Oops.

Eventually, after far too many attempts, Jensen and I make it to the end of the mission, where he’s whisked away in a helicopter to a facility controlled by F.E.M.A, which does the dirty work of the US government.

By this point, supplies are running low. There hasn’t been any alcohol in a while so I decide to sneak Jensen through the first area sober. He still has that bottle of whiskey, though, and the opportunity to swig it soon comes along. Rounding a corner in the basement of the facility, Jensen comes across a massive rocket launcher perched on top of some crates. The perfect end to a birthday celebration. He fumbles around in his inventory to make space for the weapon. 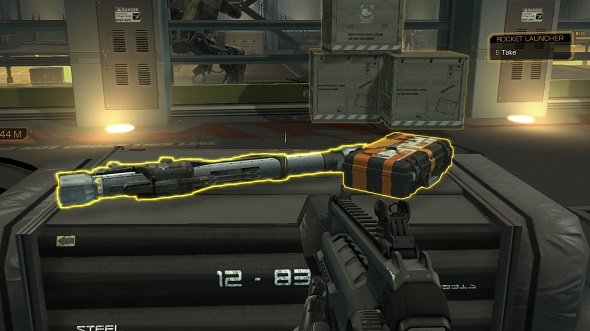 He’s going to need it: on the other side of some metal slat windows is a giant four-legged mech that could tear Jensen apart in seconds. I make him gulp the whiskey for courage and his vision instantly swims. Barely able to make out the weapon in his hands as he staggers forward, he slams his back against a pillar, for support as much as for cover.

He’s picked a good spot. The mech is whirring and stomping not ten metres from him. Even in this state, he can’t miss, surely. And Jensen is quieter on whiskey than he is on wine, it seems, because none of the guards in the area have spotted him slipping about behind cover like a fish on stilts. Seeing an opportunity, I lean Jensen out from behind the pillar and fire the rocket, holding my breath before the impact. It slams into the mech which erupts in a ball of flames.

But the machine doesn’t go down, and the commotion attracts the attention of the nearby soldiers, who pepper the pillar with bullets. Somehow, Jensen manages to cleanly slot another rocket into the launcher, lean out – bullets apparently bending around him like some boozy Messiah – and pull the trigger.

Through the whisky haze I see the mech flinch, sway, and then buckle at the knees, keeling over. A few seconds later, it explodes in a giant shower of metal and glass. It’s a glorious sight.