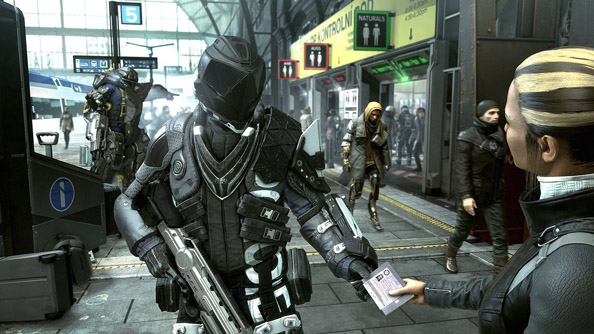 What are you doing on February 23rd? That’s so far away it might as well be 2029. You probably have absolutely no idea, unless you’re getting married, in which case you’re granted a temporary reprieve from cyberstealth shenanigans. The rest of you will be expected to report for your first day at future Interpol on the last Tuesday of the month. That’s Deus Ex: Mankind Divided day.

“The team has been working hard on the game,” said Eidos Montreal community manager Sacha Ramtohul. “And even if its release is still a few months away, having a set date where we know you’ll get a chance to experience the game first hand is a huge motivation for all of us.”

The studio made the release announcement on the PlayStation Blog today, where they also talked pre-order bonuses at length. In the “spirit of player choice”, they are many and divergent.

The current zeitgeist dictates that there’s an element of community effort involved – as sale figures climb, extra pre-order bonus tiers will unlock, up to a total of five. The last is quite significant: a four day head-start on Mankind Divided’s stated release date, which would give you the weekend.

Early buyers can build up the bonuses they want as new layers unlock, picking from in-game item packs and extra missions or – if they prefer the balance of the game unmuddled – digital books and music.

There’s also a collector’s edition which includes everything, as well as some physical doohickies – a 48-page artbook, a steelbook, and a 9″ Adam model.

Ramtohul tells us to keep listening for more reveals in the months leading up to release. What are you hoping to hear about this marginally-less-yellow sequel?