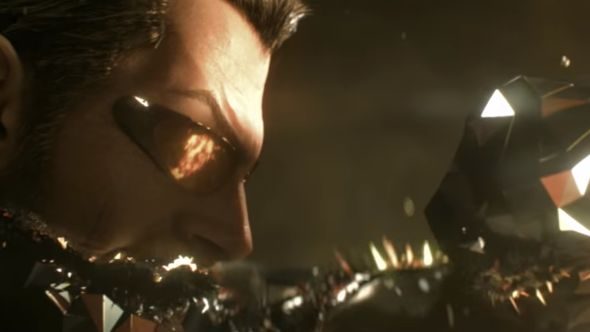 There’s nothing like a TV trailer to see a game broken down to simply its most ridiculous elements. This latest Deus Ex: Mankind Divided has it all – golden skin, lightning rocket boosts, superhero landings – and even has time for the best WWE pay-per-view theme of the past 10 years.

For everything else Deus Ex-related, check our round-up of Mankind Divided’s release date, features and what we know.

No, don’t disagree, Jungle is basically hype: the song, and I won’t hear a word against it.

As for the footage there’s the barest hints of some gameplay, plus some brand new cinematic bits. Ignoring what’s new and focusing on the pretties, my goodness it’s going to be a good looking game. Even outside of the ludicrous cutscene quality on display, those gameplay segments look incredible. Hopefully no downgrades for this one.

After its monster six-month delay, the game’s out on August 23, just in time for the Gamescom-come-down. We’ll have the PCGN verdict for you as soon as possible, as well as our signature 4K footage once it’s available.