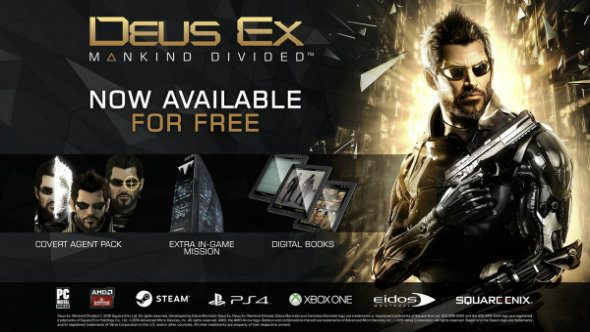 If you didn’t pre-order Deus Ex: Mankind Divided you would have missed out on the extra Desperate Measures mission included for early adopters. Luckily, Square Enix have just made it free, along with a bunch of other day one goodies.

As well as the mission, you’ll get access to the Covert Agent pack – “a compilation of skins for Adam’s armor and trench coat, a re-skinned pistol and combat rifle, and various consumables”.

This will all be added to your library automatically when you update the game.

We're making the Augmented Covert Agent Pack DLC for #MankindDivided free! On Steam, update the game. On PS4/XB1, download it via the store. pic.twitter.com/s7DmUtNJPp

There are also three digital books you can download: Deus Ex: Hard Line, written by James Swallow; a mini comic, The Dawning Darkness; and a mini artbook. There’s a link over on the Steam announcement.

Why the sudden generosity? Well, they’re probably getting ready to announce the next bit of DLC, so they’re hoping to increase player numbers for when that happens. Just check out the replies to that tweet above and you’ll see people asking about the upcoming DLC, A Criminal Past, with Square Enix teasing news “soon”.