Grotesque, ghoulish creatures crawl from pustulating fleshy geysers, exemplifying Capcom’s gruesomely indulgent horror game MO. But these aren’t the mean streets of Raccoon City. No, this is Red Grave City – a beautiful maze of grand streets fractured by hordes of invading demons as visceral as the stomach-churning gore in the latest Resident Evil 2 remake.

That’s exactly what the RE Engine has brought to Devil May Cry 5; a sense of realistic gore never before seen in the outrageous action series. It’s all that blood and glowing goop that takes you right back to Devil May Cry’s seminal horror roots. Set against the gothic backdrop of a faux-London rendered in full photorealistic glory, the latest engine allows for all that gratuitous DMC action to shine through even in an occult hellscape.

Every enemy is introduced with a zoom shot, displaying each critter in all its noxious and vile glory. Take, for example, the Empusa, its bug mouth agape with vicious fangs, exposing a ghastly human face screaming out from betwixt its glowing eyes. There’s just something about the RE Engine that draws you to the mouths, monstrous or otherwise. Just me? Ok.

And the ghoulish Death Scissors, wielding a giant pair of scissors, gives me the willies – among countless other foes. Artemis, the “illuminating corruption”; the Hell Caina, a hooded, rotting skeleton with a crown of thorns; or the Hell Antenora, a twin-bladed, faceless butcher complete with worn noose around its neck – all potential survival horror ghouls in their own right.

“It’s interesting because we didn’t initially set out to make grotesque creatures. We’re looking at RE2 – and RE2 is a lot more grotesque than what we’re doing,” Director Hideaki Itsuno and producer Matt Walker tell me. “But part of that might be because when we design enemies for Devil May Cry, one of the key aspects of that is there needs to be an element of death to them. So maybe that’s why you feel that when you look at them.” 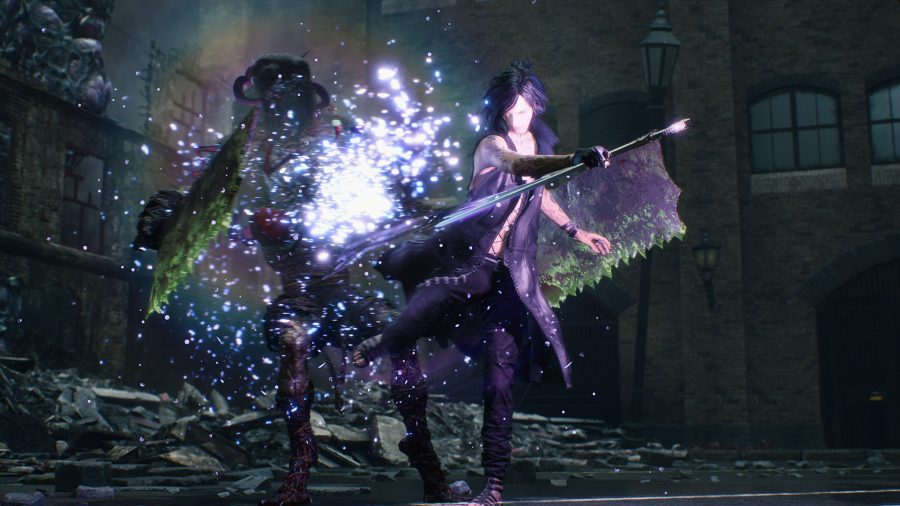 “Now, because of the tech, you see all these details that our artists have painstakingly added in order to make it feel realistic.”

But just because the latest game takes the macabre and grotesque further than ever before, fans of the series needn’t be worried. The fifth instalment in the mainstream series still holds on to a lot of the exquisitely childish dialogue from past titles, and its cutscenes are just as outrageous as ever.

When we design enemies for Devil May Cry, one of the key aspects is there needs to be an element of death

The story opens mid-action, guiding Nero and V towards their fated encounter with the big bad. Before long Nero stumbles across Dante, Trish, and Lady all but dead as the game unfurls into a MacGuffin slog-fest to drive the player out into the world in search of red orbs and bigger, better firepower.

But between the fantastical moments that would’ve had a younger me – a believer of the big sword/coolness constant – hooked, there’s a whole new dimension of tactical gameplay. Nero returns to the fight sans Devil Bringer. In its stead is a whole arsenal of Devil Breakers, mechanical arms created by the artisan of arms, and supposed Nell Goldstein relative (I read that somewhere), Nico.

Now tweaking your loadout via an in-game menu isn’t particularly Devil May Cry. But for Nico to come crashing through a wall in an RV with ‘Devil May Cry’ scrawled on the side in blue neon to bring up said menu – well that’s about as super, sexy, stylin’ as it’s going to get. 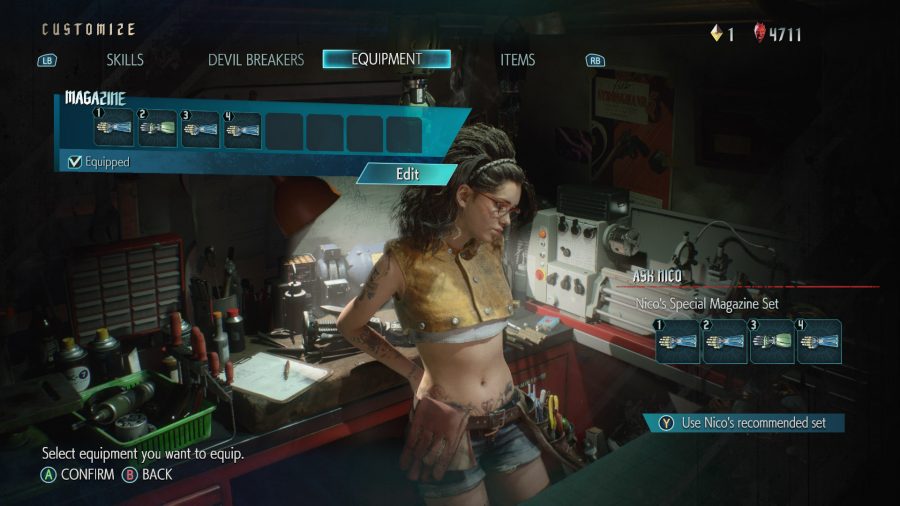 After a little in-menu tinkering and with a fresh magazine of Devil Breakers at the ready, Nero is ready to square up to the first major boss battle of the game: Goliath. Now this lumbering brute with a belly full of lava packs a punch – his design is fantastically wretched, I’d add – but nevertheless I went into combat in traditional DMC4 style, Blue Rose blazing, Red Queen swinging, and… got pummelled six ways ‘til Sunday. The key to this boss battle as it turns out: Gerbera.

Check if your PC is ready

Gerbera is the second Devil Breaker introduced to the player – one of eight in the standard game – and certainly one of the most useful for evasive manoeuvres and flowing aerial combat. With this hand locked and loaded, Nero is a tiny gnat constantly eating away at Goliath’s health without ever spending enough time in the same spot to be squashed. That is until Goliath yawns its cavernous pit open and sucks your new arm into a fiery oblivion – hence you should always have a spare Gerbera to hand… groan.

“Part of playing Nero should be the idea of having to think before the battle,” Itsuno and Walker say. “Ok, what’s my magazine loadout going to be like, or as you’re going to the stage how you want to change that up.

“There’s all kinds of versatility in all of them and part of the gameplay is figuring out what you think you want to do and how you want to bring that load out to the table.”

And that’s just one of three characters, and one of the more familiar of the bunch. Once you get to V – the most recent addition to the Devil May Cry roster – everything changes all over again. V may have that air of a troubled teen about him but he’s actually one of the more exuberant characters in the series. While Dante and Nero rock similar weapons and tactics, V doesn’t fight. Instead Shadow, Griffon, and Nightmare, his three pet demons, take on the grunt work, leaving V to dash forward to finish enemies off in style – whether they’re on the ground or up in the air. 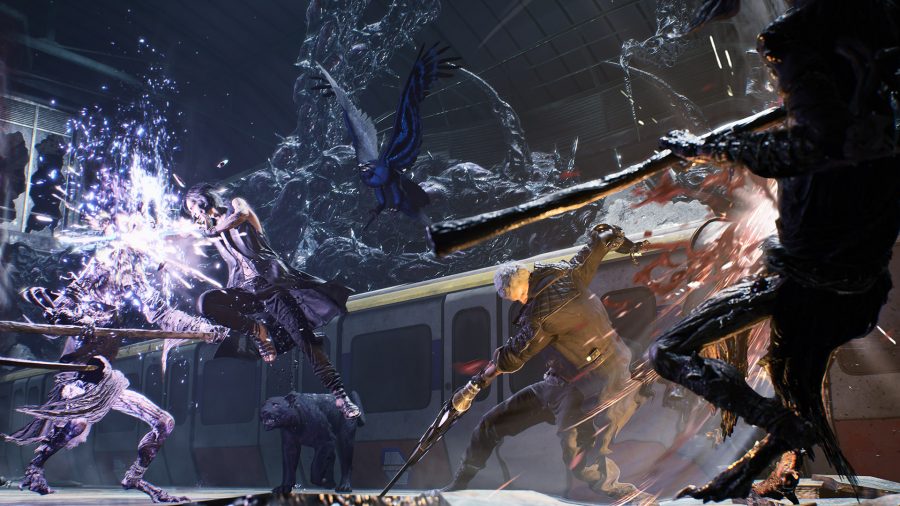 And a part of what the devs were hoping to achieve with V, along with the variety in Devil Breakers, was to appeal to both the die-hard fans and newcomers to the series. And it feels like between the three playable characters – Nero, V, and Dante – and the litany of granular weapon, combo, and moveset combinations all the way down, there’s something for players of all skill levels. As Itsuno puts it: “making it easier for people to get in, but then also raising the bar for people that want a good challenge.”

Though Devil May Cry may still fall foul of an an overt lack of tact to the nth degree at times, whether you’re a newbie or a seasoned pro, the fifth instalment in the series is a hella lot of fun. Offering up a vivid and interactive occult playground filled with monsters more grotesque than ever, it satiates that self-aggrandising fantasy of swinging big swords at even bigger monsters. All the while offering up cheesy, melodramatic comments throughout to remind you of the game’s proud heritage.