Don’t succumb to temptation. Avoid the pre-release trailers and the behind-the-scenes videos as they contain more spoilers than a Fast and Furious movie. Instead, hold your sword high above Devil May Cry 5 and wait until you can plunge the blade fully into its fantastically absurd heart. After ten years, this is an energetic, unapologetic, and egregiously fun return to the mainline DMC timeline – you’ll want to take it all in at once.

Devil May Cry’s fated story has been building since 2001, meandering through demonic cults and various nemeses that almost always turn out to be Dante’s dastardly brother in disguise. It’s a series that has been marching towards wrapping up the Sparda brothers’ timeline for a long time. But it’s not over yet. This fifth instalment isn’t that triumphant curtain call for DMC’s rambunctious cast.

Instead, Devil May Cry 5 reminds me why I’m glad not to see the back of Dante just yet. Sending horrific devilspawn spiralling limply into the sky, only to be mercilessly drilled downward into a pulp of its own juicy innards, still has plenty of life in it yet. Especially as the whole messy process of dispatching demons has been beautifully revised since a decade ago.

The RE Engine realises the grand streets of Red Grave City in realistic Technicolor, while the ghouls show that it can do distressingly grotesque as well as architectural grandeur. There’s also a whole new character, V, who brings about a momentous change to the combat system that has propelled the series this far.

Something new: These are the best new PC games in 2019

Harmonious, unbroken combos are still what the game is all about. Each move seamlessly blends balletic gunplay with toe-to-toe strikes and screen-shaking slams as you fight to keep your enemies exactly where you want them: six feet under. At least that’s the idea. I found it all too satisfying to resort to blowing demons to smithereens with the Katalina Ann rocket launcher. But that’s just me.

Building up combos is both challenging and highly rewarding. As each grade ticks over – from Dismal to Super, Sexy, Stylin’ – the accompanying metal soundtrack grows in fiery intensity until it eventually reaches its apex. The inferno of bullets, blades, and aggressive guitar riffs culminate in a shower of red orbs raining down from up high.

An element of death

Check out what director Hideaki Itsuno and producer Matt Walker have to say about designing DMC5's grotesque enemies.

That’s certainly how Nero and Dante fight. But V is different, introducing an arms-length approach to combat, ordering his pet demons to maul and ravage the enemies while he swans around reading poetry. The distance can pose an issue during combat, however, as V’s minions often linger frustratingly far away from enemies, scratching and pecking at the air. Nevertheless, V’s combat is highly entertaining, and opens up Devil May Cry V to those seeking instant satisfaction, or who don’t have the hours it otherwise takes to master the game.

But don’t worry, if you’re among the hardcore fans of the series the masochistic difficulty that no doubt drew you in is alive and well. In fact, it’s been turned into a gluttonous feast of mechanical arms, ridiculous guns, and even a possessed motorcycle that doubles up as a weapon. Devil May Cry 5 is essentially a bloodied slay-and-display convention for devil slayers. 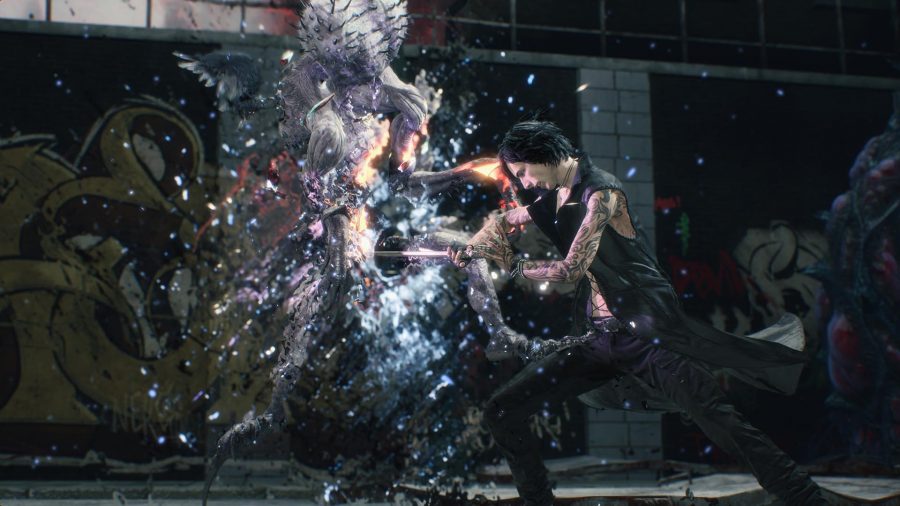 Mastering movesets for all these weapons with the rhythmic timing necessary is tough, as is making use of the game’s succinct weapon swapping mechanic, and then the multiple Devil Breaker loadouts on top of that. Red orbs are in abundance throughout so as to allow for a continuous stream of new skills, both fresh and familiar, to try out in every mission. As such, Devil May Cry 5 is far more deserving of acclaim for its range of tactical options than the hack-and-slash genre usually gets.

Fight to keep your enemies exactly where you want them: six feet under

And what would a Devil May Cry game be without a story torn straight out of the pages of a manga that borders the ‘adults-only’ section of the bookstore? The story slowly unveils an impressive hierarchy of bigger and badder demons, but intertwines that with cheesy moments, most of which I can’t stomach as well as I did as a spunky 14-year-old kid. It does at least build to a fine crescendo.

Yet with a universe crammed full of possibilities, I feel more could have been done to weave a narrative that sits independently from the macro DMC universe and is more deserving of praise. It’s enough to keep you mashing away at your keyboard or controller, but nothing more. 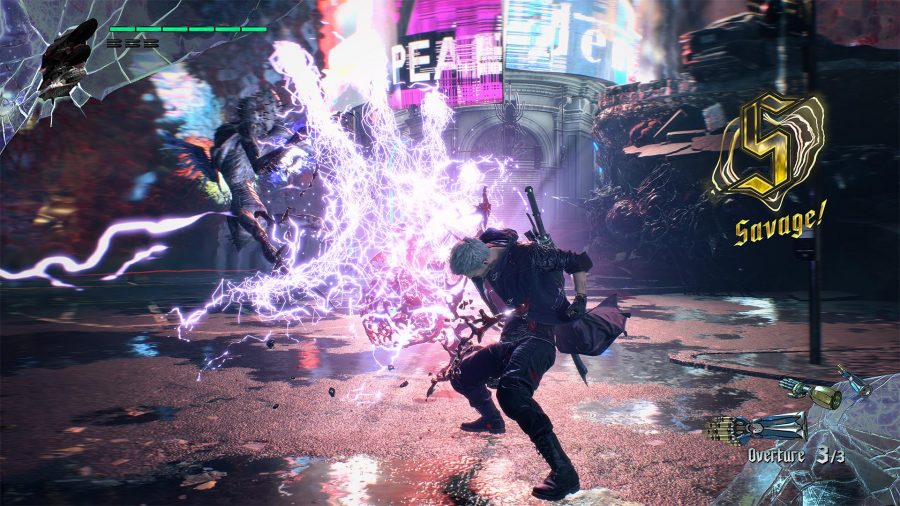 Fans will at least appreciate the return of the entire gang and the setup for a sequel. Though it’s disappointing that some of the most well-known characters, Lady and Trish in particular, only serve as titillating callbacks to past games and nothing more. If you don’t have prior knowledge of the protagonists then the story will probably lose its lustre completely. Capcom has seen fit to include a brief summation of the prior games just in case, but it’s a lot to take in.

Capcom knows its audience well and is more than happy to throw its favoured demographic a few salacious bones – some more egregious than others. I found the game’s in-your-face troubled teen attitude abrasive at first. But once Dante was handed a cowboy hat imbued with demonic energy, so rich and flavourful that the spirit of MJ surges through him, I remembered what it was about Devil May Cry I once loved so dearly.

Few games are as endearing in their madness as this. Capcom's brawler is deeply old-school and made for fans first, but its new character will entertain newcomers and keep them coming back for more.