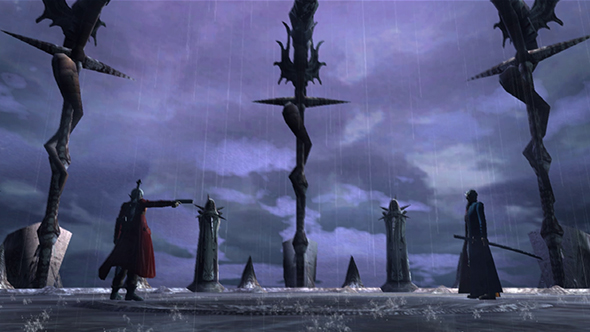 Update, December 15: The Devil May Cry HD Collection will support resolutions up to and beyond 4K on PC, but will be locked to 60fps.

The Devil May Cry HD Collection was announced last week, collecting the original trilogy of Dante’s adventures in a single, complete package on consoles and PC. But it wasn’t exactly clear exactly how extensive the remasters of these PlayStation 2 games would be, or how well they would support extended options on PC.

Who loves old games? You love old games! Check out the best old games on PC.

Capcom rep WBacon has confirmed that the Steam version collection will support resolutions up to and “beyond” 4K. This came into question when Capcom told USGamer that the ports would be locked to 1080p, but it seems that only applied to the console versions of the collection.

However, it seems we won’t be getting unlocked frame rates, because “these are all old legacy titles which originally came out wayyyy before MT Framework came into play,” with game logic tied to refresh rates. The good news, however, is that – unlike the 30fps locked Okami HD – Devil May Cry always played at 60fps, so it’ll it least offer a minimum level of smoothness.

It seems WBacon has also confirmed the version of DMC3 included in the collection has nothing to do with the messy PC port released in 2006, which is apparently still on Steam.

Original story, December 7:The original Devil May Cry trilogy will be remastered, packaged up, and rereleased very soon, asCapcom have announcedthe Devil May Cry HD Collection to be released March 13, 2018 across current platforms for $29.99 USD.

The collection will feature the PS2 trilogy with sharper visuals and 60fps frame rates (no less than the originals, of course), and yes – it will be coming to PC. Devil May Cry 3 is already available on PC, but the port was pretty poor, so hopefully the new collection will rectify those issues. The more recent port of Devil May Cry 4 fared much better.

It’s worth noting that a Devil May Cry 5 announcement has been heavily rumored in the past few weeks thanks to an anonymous poster on ResetEra. A potential DMC5 would, of course, ignore Ninja Theory’s controversial reboot of the series with DmC, and return us to the story of the original Dante. A collection of those original games would make sense if a DMC5 announcement were coming soon at, say, an event like The Game Awards or PSX this week.

Either way, we will soon once again be able to enjoy some of the greatest classics of character action gaming. And Devil May Cry 2, also.