Trion Worlds has proven itself in the traditional realm of MMOs with the likes of Rift and ArcheAge, but the next roll of the multiplayer dice is something a little different. Devilian is a ARPG flavoured MMO; the isometric view and fast paced combat of games like Diablo and Path of Exile but with masses of players joining in on dungeons, raids, and guilds.

It’s a good, workable idea, but it’s not Devilian’s key feature. The interesting thing about it is all in the title: a Devilian is your character’s second form; a monstrous devil that you can morph into at any time to wreak extra havoc on your enemies.

It’s very early days, so there’s really not that much game, but Trion were happy to show what they’ve been working on. The hands-off demo saw a lonely character exploring a zone of Devilian’s word on the back of a huge armoured polar bear. It instantly feels familiar, with a stylish bright look that certainly has a little Diablo 3 in it. The area transitions from green pastures to an icy tundra, where the shuriken-throwing character dismounts the bear and attempts to bring down a towering ogre boss. It’s designed to be taken down by a team of players, but at this stage of development the server is completely devoid of real players. There’s no hope of defeating this thing, even with Devilian form active.

This idea of a devil on your back interests me. Devilian has four classes: the spell-slinging Evoker, the ninja-like Shadow Hunter, the trap-setting Cannoneer, and the heavy defensive Berserker. Every one can transform into a Devilian, making them diverse, multi-layered classes. But the Devilion form isn’t just an extension of your character; it’s an entirely separate entity.

“[Your main character and your Devilian] grow independently of each other, but they very much compliment each other,” explains Associate Producer Andrew Sipotz. “You can transform into Devilian mode to get that extra oomph of power, as well as enable a whole new set of hotkeys, a whole new set of tools to use.” 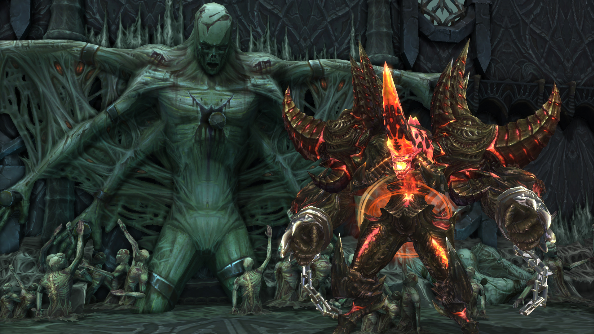 “You definitely want to make sure your Devilian grows alongside your character. But you’re never at a point when you’re completely messed up,” says Sipotz. “You can always go back and do content as your Devilian, or engage in some PvP to help yourself level up. There’s also a dungeon that’s a great place to level your Devilian.”

Devilian’s levelling bridges across PvE and PvP. Questing is obviously the primary method as in any MMO, with large numbers of players being able to mingle and fight mobs in instanced overworld zones. Groups of three will be able to head into instanced dungeons. PvP can be both in the open world (as an opt-in experience), or in 20v20 arenas as a capture-point style competitive game. “That’s a really unique system,” says Sipotz. “Everyone’s in Devilian mode, you can capture and spawn NPCs to help you. There’s also 3v3 smaller arenas, so if you want that more personalised, competitive gameplay style, you can go for that.”

Character growth comes from a typical set of skill trees that can be mixed and matched to find your ideal build. Further customisation comes in the form of Talismans: a kind of collectable card set that offer stat boosts or interesting new traits. They can be found in the world or crafted, and your character has a limited number of Talisman slots. The idea is to find Talismans that compliment your play style, and continued use of them will cause them to level up and provide more impressive bonuses. 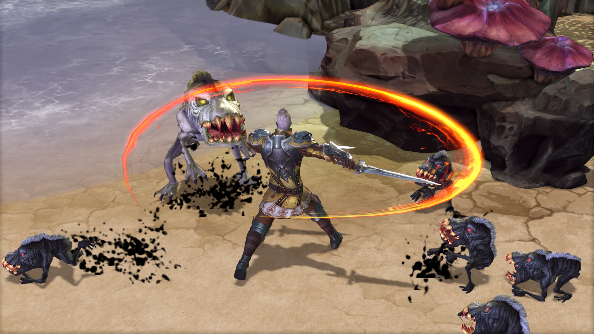 As an MMO, social and guild elements play a large role in Devilian. When fighting bosses in the overworld you can summon your guildmates to join in and help you. If there’s only a handful of your guild online, you can forge alliances with other guilds and request help from them, too. But as easy as alliances are to make, so will rivalries be. If a rival guild is trying to take down a boss but you want the potential rewards for yourself, you can declare a guild war and march into battle to decimate both guild members and the boss.

Trion want you to help in other ways, too. Each day you can offer a couple of presents to another player in your guild; things like buffs or potions. The more you gift a specific player, the better the items you can offer them each day. This should hopefully promote friendships within guilds. And you’ll want as many friends as possible to take on the game’s 10-player raids.

The groundwork for a successful union between ARPG and MMO is certainly here in Devilian. But whilst exciting to see a brand new IP, it’s a shame that we couldn’t see Devilion running with fully populated servers. With a strong guild army all transformed into Devillian form, that ogre boss wouldn’t stand a chance.