Devilian, Trion’s MMO ARPG adorned with gothic armour and scary-looking swords, has been out in the wild for a few months, so it’s about time it had an update. And, conveniently enough, that’s just what’s happened. Fury of the Tempest is an update/expansion deal that has added a new raid, dungeons, gear, and increased the level cap to 54. Headlining the update though is the Tempest herself: a deeply dangerous new class who likes to twist the knife.

Like carving your way through enemies without taxing your wallet? Try one of the best free PC games.

The Tempest is described by Devilian’s dev team as “Lara Croft with blades”, although I’d say that’s very much based on the Lara Croft of the late ‘90s rather than the more interesting evolution we have today. But once you get past the increased attention to detail in the gender-specific areas of the Tempest, you’ll find that she’s a fun, high-kicking, fast attacker.

Devilain is a pretty speedy game, but the Tempest feels notably quick. Gangs of enemies disappear in huge clouds of red mist as she strikes through them with her twin daggers, and multiple abilities let her dash from one side of the screen to the other, making her very strong at repositioning for new angles of attack. 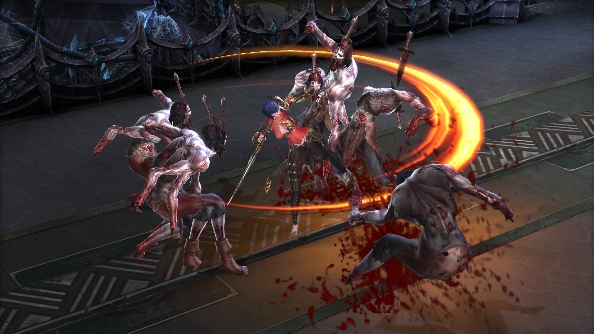 In her devilian mode, the Tempest switches technique to much heavier attacks, with a lumbering scythe that deals out big damage in exchange for a lengthy cool-down. Between those sweeping assaults you can summon a swirling black hole at your feet for sustained damage, and even injure yourself as payment to remove all status debuffs.

In terms of her day-to-day human skills, expect to be very much on the offence with abilities that have a wide angle of approach. Basic attacks see the Tempest’s arms flail around to take out two or three enemies at a time, while more advanced techniques resort to pirouetting around the map like a spinning-top attached to a blender. She’s a bit like God of War’s Kratos: a whirlwind of pain, with added acrobatic high-kicks.

An even closer comparison though would be Devilian’s own classes. My previous time with the game was spend controlling a Shadow Hunter, and while there are notable differences between the two, they don’t feel entirely distinct from each other. There’s still all the dashing, the swooping AoE attacks, and the quick and dirty close stabs. If you’ve played as one of the existing close-quarters characters already, the Tempest won’t be the pulling point of this update. 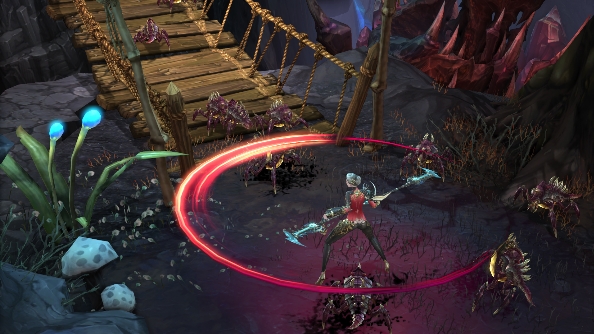 Instead, the magnet for those players will be the two new Archdevil dungeons. Designed for the newly increased level cap, Severam Fortress and Bottomless Pit are for dedicated level 54 players. Each is home to a new boss – Nightmare and Dekaramieh – and naturally with such a high requirement at the gates they’re exceptionally tough challenges.

High-level players also have a new raid to take part in. Tower of No Return is a nine-player raid against Denikhalis, who attacks with a combination of four elements. It’s been designed as one of the most challenging dungeons in the game, and so once again is another component of this upgrade that’s been designed for Devilain’s devout.

For the fashion (and safety) conscious player, the final key part of the Fury of the Tempest update are the new armour sets: Phantasm, Carnage, and Slaughter, which will deck a level 54 character out with some impressive defensive stats. If you’re a PvP player, level 54 Demogorgon gear will keep you protected when bracing against other player’s moves.

Devilian is free-to-play, but major updates require a bit of investment. While the new dungeons and gear are free to all, the Tempest pack is available at an introductory price $9.99 / £7.99. If you’d like to take her for a spin, you can buy the new class from the Devilian in-game store.