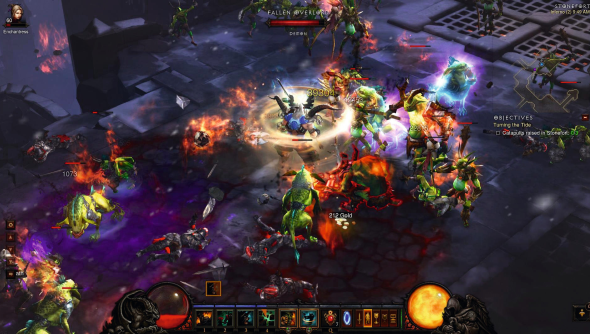 Blizzard have proven themselves again to be one of the studios most dedicated to supporting their games post-release. Diablo 3’s 2.1.2 patch goes through each class and feature of the game with a tiny weighing scale to make sure everything is balanced.

Most exciting in 2.1.2 are the new ancient items that are even more powerful versions of some of the game’s best legendary gear. The Greater Rifts have been rebalanced, too, so now they are more fair and pay out more gold.

The patch notes are far too long to adequately summarise so I’ve included them in their entirety on the next page. What I’ve collected here are some of the highlights.

The rarest of rare legendary items have been slightly more common so more players will be able to find them. While you could see that as cheapening their worth, Blizzard have added a new class of item, ancient. They’re more powerful versions of legendary items – they have increased value ranges over the original legendary. You can only find them while playing on the Torment difficulty setting and if you play on one of the Torment multipliers, each increase in multiplier increases the chances of an ancient dropping. If you don’t fancy dungeon running then Blizzard say that any legendary item you craft has the chance to come out as ancient. (How you can newly craft an ancient item is anyone’s guess.)

Greater Rifts now reward more gold and experience on completion. However, the number of monsters you’ll face in the Rifts has been increased (though their damage has been reduced).

Blizzard have also played with a couple of the Rift Guardians. They say that Bloodmaw “ presented an unchallenging and unfair fight due to a combination of one-shot damaging abilities, stuns, and AoE damage.” So they’ve modified his leap attack “to address these concerns.” However, it will trigger more often. Erethon’s dash attack’s been altered and he’s been stripped of his AoE damage. Rime wasn’t fair on melee players so “his AoE can no longer overlap and the duration of each has been reduced.”

Blizzard’s also buffed a number of the Rift pylons (except the conduit pylon, which they’ve nerfed), though they’re less likely to spawn next to each other. The conduit pylon now deals damage based on player weapon damage, only attacks a limited number of targets, and will now attack the same target less frequently. The shield pylon now reflects damage back on its attackers. And the speed pylon’s duration has been increased from 30 seconds to one minute, knocks enemies into the air and deals damage to them, and can break destroyable objects.

You can find the full changes on the next page.