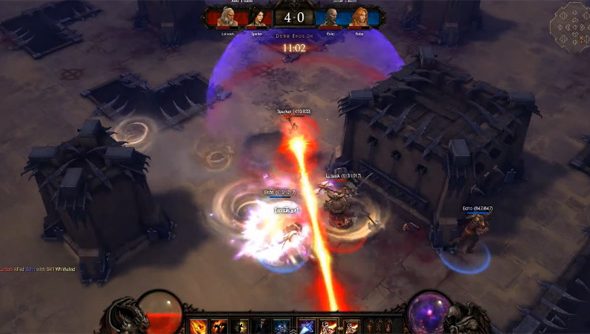 Patch 1.1 will be Diablo 3’s biggest update so far, introducing the PvP arena mode that was missing at launch as well as a host of other changes and fixes. It’s a tidy bag of surprises and treats, and we’ve no idea when it’s due to appear. But here’s what we do know about Diablo 3’s PvP update.

The PvP update is set to add multiple, themed arena maps for team-based player versus player combat. It’s also going to include PvP-specific achievements and a matchmaking system to ensure your team isn’t smashed into a fine bloody mist by more competent players. There will also be a “personal progression system” that will reward successive wins and keep a tally of your PvP career. So expect leaderboards and player rankings, both of which Blizzard have said will possibly be included in the 1.1 patch. Victory in PvP won’t net you loot either, but rather you’ll earn titles, achievements and bragging rights through “Call of Duty-style progression”.

For their own sanity, it seems Blizzard will be restricting all “official” arena matches to level 60 characters too, which takes a whole lot of balancing work off their shoulders. Lower level characters will still be able to duke it out in an unofficial, unbalanced capacity. Here’s a video of a PvP battle, which was shown at Blizzcon in 2010.

Beyond the addition of PvP, patch 1.1 will also increase the power of all new legendary items. That is, whatever you’re holding on to now will likely suck while freshly dropped legendary items will be 1.1-grade niceness.

Blizzard will reveal more about the changes being in 1.1 as we approach the thing’s still-to-be-announced release date. They’re currently working on a second hotfix to 1.0.3, set to go live this week, which adjusts item drop rates in Hell and Inferno. Pfft, I say keep your item drop rate adjustments Mister Blizzard, and let me start smacking other players about with my level 60 Monk. His palms are itching.