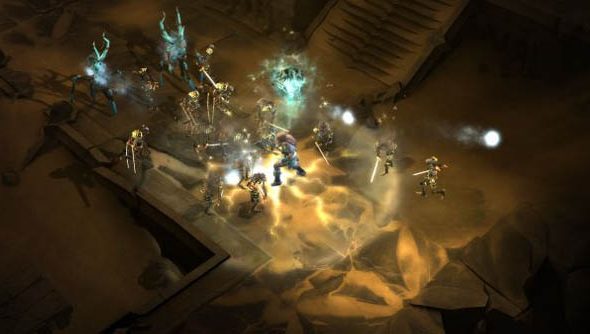 One of the changes that players may not have been expecting to be highlighted separate from Diablo 3’s 1.0.7 patch notes is the change of nomenclature the update will bring: from henceforth, Blizzard’s PvP ‘duels’ will be called ‘brawls’. Partially, the reason to draw attention to this seemingly minor change in a whole separate thread on Battle.Net is to save any confusion when the patch is released (it’s as though Blizzard just know that a whole slew of gaming sites would report that Diablo was gaining a whole new PvP mode). But, as well as this more obvious need, it’s begun an interesting discussion of terms, and the meaning we tie to them.

“While the system we designed for 1.0.7 was developed in order to give players a fun way to beat each other up in Diablo III, we’ve come to realize that “dueling” wasn’t the best name for it,” continues Lylirra.”Sure, it allows players to pummel, stomp, immolate, and hex fellow Nephalem (over and over again, if they so choose), but it’s not a traditional one-on-one duel. It’s something much more wild and open-ended, where you can engage in 3-person and even 4-person free-for-all skirmishes with few restrictions.”

I find it fascinating to learn that this sort of discussion is going on, still going on at Blizzard. Diablo 3 is nearly a year old and the PvP duel has been a promised feature since long before launch, yet the name of it is still something that is subject to change. Despite being full able to continue with the title, one which even thoughthey think is ill-fitting would have been accepted by players, they’ve decided to retitle it. It seems like such a small thing, and, yes, in the grand scheme of things it is but they’ve still considered it.

They’re quite right, though. The word ‘Duel’ evokes a much more noble ideal. The sport of a gentleman (a word similarly mired in a state misappropriatepion of definition). Switching to brawl makes the whole activity seem dirtier, more rough and tumble. As Lylirra says,”[t]he system is all about letting players fight for the sake of fighting—you don’t need to worry about objectives, rewards, or scoring, and that’s exactly what we love about it. But again, that’s not really dueling; it’s brawling!”

Good on Blizzard, I say.