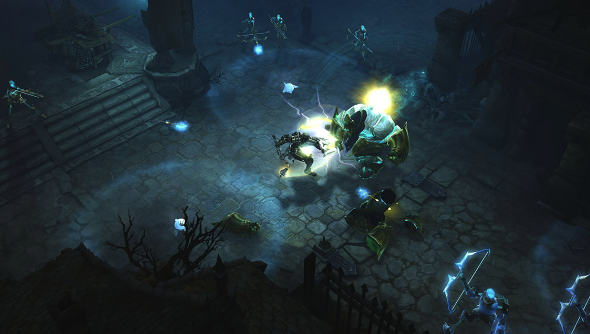 I think I’ve killed the Skeleton King about a dozen times. The Butcher even more. Fundamentally, Diablo III is about repetition. Repetition of the story at different difficulty levels on the path to 60. More repetition to reach the paragon max level. Repetition of individual bosses and acts to discover the most efficient route to gather loot. Repetition of everything to level alternate characters.

For one: it’s remarkably, incredibly efficient for levelling. On a brand new Crusader character, I reached level 10 in about an hour purely through playing Adventure Mode. What’s more: it’s extremely rewarding – in that time I was rocking a set of loot that was way in advance of what I earned playing Diablo 3’s campaign, including a legendary.

It’s also varied. Skipping between the different bounties on offer means that you’re rarely caught in a slog. You’ll bounce between dungeons and open world play, deserts and forests, always moving to something different. Shorn of the storyline, you’re able to better appreciate the core of Diablo III’s randomisation.

And it’s rewarding. Adventure Mode showers you in stuff. There’s gold, loot and XP, of course, which is thrown around in heaps as end of quest rewards. But there’s also new currencies that are dropped when you finish a bounty. Blood shards can be exchanged with merchants for randomised loot bags. And Rift Keystones can be used to access madder, harder loot runs known as Nephalem Rifts.

Nephalem Rifts are very, very clever. They’re very short (the ones I’ve played took around 10-20 minutes) and are rammed full of monsters. They’re Blizzard’s randomisation routines set free: with dragons fighting along skeletons, ice skeletons paired with angry goats. Essentially, any of Diablo III’s monsters and tilesets can be shuffled together in short bursts, with a far higher monster density than what is available in normal play. They are a concentrated burst of endorphin.

It’s worth mentioning, too, how the lack of an auction house dramatically improves the game. Crafting now has meaning. The stash has meaning. Loot dropped day to day has meaning. There are soulbound items and gems. The systems that form the core of Diablo III are no longer undermined. It fits together. Even with a stash of millions of gold from previous characters, there were no shortcuts: I had to earn my gear.

With Reaper of Souls, Diablo IIII’s game loop is fundamentally altered. After you’ve completed Reaper of Souls new act, you’re not going to be thrown back into the main game to burn through it again, and again, and again. You’ll find yourself in front of the map, wondering where to go next. Which exclamation point to attack. It’s the same world, but with a new impetus to explore. I can’t wait.