I never finished Diablo III’s campaign. Like many gamers, I simply lost interest along the way and stopped logging in. But the Diablo III panel at BlizzCon yesterday got me excited to jump back in to get ready for the game’s first expansion, Reaper of Souls, which will be released sometime next year.

Diablo III’s auction house never really bothered me, but a lot of frustrated gamers will be happy to know that it’s gone. The dev team was humble and honest when addressing concerns about the auction house, although their response to gamers lamenting the always-online restriction was notably lacking sympathy.

What really caught my attention in the dev team’s reveals was Adventure Mode, which allows players to jump around the world, into any area in any Act, with absolutely no restriction. You can even adjust the difficulty for each session individually. Feel like battling a boss in Act 3, then grinding in an Act 1 external zone? It’s easy to do with the mode’s teleport map that lets you hop directly to any major section of the game.

Freedom-phobes will be rightly terrified after reading that last paragraph. Don’t worry, my fearful friends, the dev team is also adding in Bounties. These are mini-quests given to defeat a certain boss or fight through a certain dungeon in the world to provide a guide to those that want one. You’re never forced to pursue them, but you’ll get some nice XP and gold rewards if you do.

The dev teams described their goals as wanting to ensure that the system made the most rewarding option also be the most varied and fun. It sounds like a solid plan to me, especially since five Bounties will be assigned in every Act every time you start an Adventure session. That’s a lot of variance, and a lot of mini-quests for me to hunt down, that’ll keep me coming back for more. 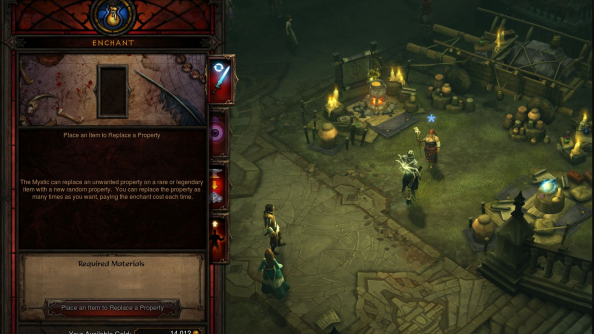 These are dungeons that completely randomize all aspects, from the number of levels (1-10), to the terrain (it can be anything) and to the enemies (it’ll pull from all of the Acts simultaneously and their density (it can be hyper-dense, to absurd degrees).

That could have been a recipe for disaster, with unplayable dungeons that players have no hope of getting through. But the devs are giving players huge buffs to ensure they have a fighting chance in these overwhelming dens of death, such as lightning buff that occasionally arcs off and kills everything near you.

In short, Nephalem Rifts look like they’ll provide chaotic dungeon crawls where you truly never know what to expect, and lean towards giving you super-heroic events that make you feel like a badass. That sounds like another solid plan to me. 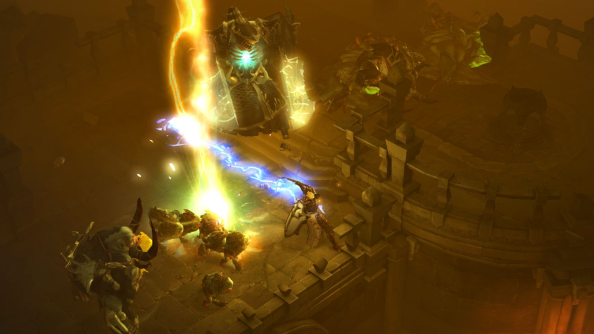 The dev team also discussed a lot of their improvements to the enemies of the game, which really convinced me that they’re taking the criticisms players voiced at D3’s launch to heart.

The Blood Marsh in particular has a very cool ecosystem of swamp monsters that interact in interesting ways. Boggans are small swamp-people that are cute in an ugly sort of way–the typical fodder enemies. Boggan Trappers try to pester you from afar with blowguns and traps, and their giant, ugly brothers, the Boggan Brutes are the true kings of the swamps. They’ll summon Boggan wimps and throw them at you before charging at your face and smashing it as hard as they can.

It’s a funny mechanic that also tells a little bit of the story of the area, and also tells you not to mess with Brutes. Of course, Boggans can be just as deadly if Terror Bats are around: they can pick up Boggans and bite them to transform them into Brutes.

It might seem like a subtle mechanic, but having to worry about the specific combination of minions and what they can accomplish if you let them stay together could add a big strategic element to battles.

A few other enemy tricks were shown. Enemy archers would backpedal and continue shooting when you rush at them instead of simply turning away and running. Little naggy minions can spawn in mass numbers randomly around a zone, but use new tech to prevent them from causing player-collision, so you don’t get completely boxed in like can sometimes happen currently.

Realm Walkers are incredible new monsters with portals attached to their heads that summon random enemies while you fight it. The best part: after you kill it, the portal drops to the ground and you can enter it to storm wherever those enemies were being summoned from. 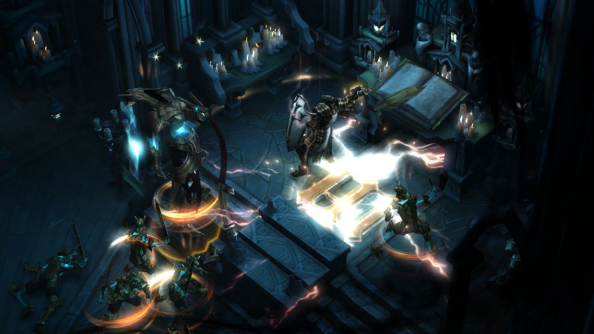 And, of course, at the top of the Reaper of Souls goodie bag is the new Crusader class. I expected something like my old Blood Elf Paladin in WoW when I jumped onto the computers at BlizzCon to play the shield-toting warrior of righteousness.

I was wrong, and I’m so happy I was. Every ability of the Crusader is infused with a sense of overwhelming might or a heavenly ally so potent that its slightest whim could decimate hundreds of foes around you.

I happily bashed, charged, and smote my way through the crypts and overrun towns of the expansion’s first level. It’s fast-paced fun in traditional Diablo style, and it scratched my ideal shield-focused fighter itch that I missed the first time around.

Heaven’s Fury quickly became my favorite ability as it summons a massive beam of light from the sky that tore through baddies like tissue paper, and hung around the area for awhile just daring them to try to stand back up.

But if heaven was too busy to help, I was happy to take care of matters myself with Condemn, an AoE taunt that lasts for 3 seconds before unleashing a huge AoE attack onto everything nearby. It’s an awesome ability in solo and group play, and it really made me feel like I was customizing my Crusader to be different than my friend’s, who was all about dishing out damage.

The Crusader had several other fun abilities but none compared to the flashiness of Steed Charge. A golden, ethereal horse appears under you and you can charge in any direction for a few seconds before it disappears. It gets a thumbs-up from me just for the visuals, but I love that it also makes you completely immune to collision with enemies for the duration. It’s an amazing escape tool.

I’m as surprised as anyone that I’m saying this, but I can’t wait to play Diablo III after the Reaper of Souls comes out, and I’m going to jump back into D3 after Blizzcon to finish the campaign before it does. The devs have clearly listened to player outcry, and have been willing to make changes at their request. That’s the sign of a good dev team, and a game that’s worth investing my time into.