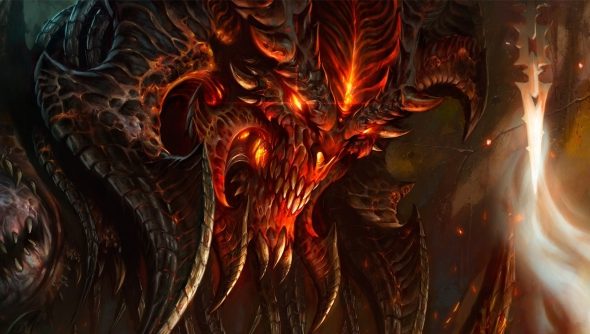 In the beginning, the most high created a PC mouse. And, to give the mouse something to do for all eternity, he took one of its buttons and made from it a finger to click the mouse forever and ever. Then he made Diablo, so it had a damn good reason to click it. And, ‘lo, across the land, the new humans he’d attached to the fingers got RSI from clicking so damn much, so wanted something Diablo-related to read while they waited for their hands to recover. So we made this history of the Diablo games and we saw it was good.

In the beginning of Diablo’s world, there was war, between the angels in heaven and the demons in hell. The war took so bloody long it ended up being named ‘the Eternal Conflict.’ As wonderful as that sounds, an Archangel known as Inarius decided that enough was enough and searched for other angels and demons with a similar lack of enthusiasm for a never-ending war.

After rallying said companions, they created a new world in which to live away form the perils of battle, appropriately dubbed Sanctuary – the world the game is set in. Lilith, the most powerful of the bad-guy-turned-good demons, decided that Inarius was a serious catch, so they and some other angel and demon couples got up to whatever it is that supernatural beings get up to and created the Nephalem. The Nephalem were the first humans and they had awesome magical powers. So awesome in fact, that Inarius thought that they might have been a threat to him. Lilith on the other hand was convinced that if she let them mature, she could raise an army to challenge both heaven and hell, stopping the war that’s been bothering everyone so much for… well, forever. This was an obvious conflict of interests, so Lilith decided to brutally murder all the angels and demons living in Sanctuary besides Inarius. Nice.


This, of course, rather irritated Inarius and he banished Lilith to an obscure dark realm in the far reaches of somewhere-over-there.
Inarius decided to keep the Nephalem alive, because a life without them would be too lonely, butBecause he was worried about them becoming too strong and ruining his peace, Inarius used his powers on the World Stone – a stone that hides Sanctuary from everything else – which sapped away the Nephalem’s powers over time, turning them into relatively powerless mortals. After some time, Sanctuary was discovered and ravaged to the point of near destruction, but a mortal man named Uldyssian arrived and used the power of the world stone to defeat Inarius and bring the war to a standstill. This inspired Heaven and Hell to form an agreement, such that that the battle would cease until the Nephalem chose a side for which to fight.

Enter Mephisto, Baal and of course the game’s namesake, Diablo. These three ruled the legions in hell, but were cast out to ‘live’ on Sanctuary as a result of their questionable authority over the Nephalem fiasco. They roamed Sanctuary, uninhibited for forty years. Tyrael, the archangel of justice, united all of Sanctuary’s mage’s into an order known as the Horadrim and afforded them the ‘soul stones’ with which they were to imprison the three brothers. The three were eventually defeated, captured and buried in locations across Sanctuary.

Enter Mephisto, Baal and of course the game’s namesake, Diablo. These three ruled the legions in hell, but were cast out to ‘live’ on Sanctuary as a result of their questionable authority over the Nephalem fiasco. They roamed Sanctuary, uninhibited for forty years. Tyrael, the archangel of justice, united all of Sanctuary’s mage’s into an order known as the Horadrim and afforded them the ‘soul stones’ with which they were to imprison the three brothers. The three were eventually defeated, captured and buried in locations across Sanctuary.

After over a century, Lazarus, a high order official of the church of Zakarum, was lured into the catacombs below the cathedral under which Diablo was buried. Here the demon prince manipulated Lazarus into smashing his soul stone, freeing him from his prison. Diablo soon sensed that Leoric, the self-proclaimed king of the region, was the perfect host and drilled into his mind to possess him.
The townsfolk began to notice that their king wasn’t quite himself, so as a distraction, Lazarus attempted to convince the king that the people from Westmarch – another city – were plotting against him. As a result, the king declared war against Westmarch despite the fact that they had military superiority.

Lachdanan, one of the king’s finest warriors, despite being aware of the king’s worsening madness, lead the army north. Diablo seized this chance to take full control of the king’s mind, as there was no one to stop him. He succeeded to some extent, but soon discovered that the king’s ego was far stronger than he’d imagined. Diablo, abandoned Leoric in favour of his son, Prince Albrecht and took him into the labyrinth below the cathedral.

Lachdanan returned from Westmarch to find that Leoric had descended into near-complete madness and resolved to kill the frail king. Leoric, at that stage mad with rage, placed a curse on Lachdanan and his men before his impeding death.

Leoric soon rose from the dead as a skeleton version of his previous self at which point, Lachdanan’s men were struck by the curse and killed. Lachdanan tried to escape the brutality, but to no avail and was also killed. Lazarus, still under Diablo’s influence, led a band of puny humans into the Labyrinth and told them that they were there to save the King’s son. This was of course a trap and the majority of them were destroyed. Some managed to escape and tell their story to the townspeople on the surface, which was enough to motivate them to abandon the cursed town of Tristram.

Enter Aiden, hero of Diablo I and the eldest (but estranged) son of Leoric. He appeared and went forth into the Labyrinth to destroy Diablo. Slaying demons left and right, including his father (now The Skeleton King), Aiden pushed further into the catacombs. As he ventured deeper, Diablo began to corrupt the hero’s mind (it’s a real pity nobody communicates that Diablo is able do this.) By the time the hero reached his goal and had slain Lazarus and Diablo, he was convinced that he had to thrust Diablo’s soul stone into his own skull in order to truly contain him. This was the perfect opportunity for Diablo as he’d finally found a suitable host with which he could seek the soul stones of his brothers, Mephisto and Baal.

So begins Diablo II. After the town of Tristram was destroyed by the demons that escaped the Labyrinth, only one person survived – Deckard Cain, who was left in a cage to die.

Diablo, knowing that his kin were locked away at the behest of the Horadrim, headed into the desert in search of them. As there was only one way into the desert, Diablo calls on the aid of his sister-demon Andariel to guard the way, preventing anyone uninvited from following.Someone always arrives to stop Diablo; this time,a band of warriors emerged seeking to stop Diablo from awakening his brothers. The heroes set off, defeating Andariel on the way, and then raced to catch up with Diablo.

On the path to free his brothers, Diablo came across a man named Marius(the narrator of Diablo II), who he took with him towards Tal Rasha’s tomb, where his brother Baal was buried. Upon finding it, Tyrael reappeared to save the day. Or, rather, to fail to save the day. During the fighting, Marius had freed Baal as a result of Diablo’s manipulative powers so Tyrael charged Marius to destroy Baal’s soul stone. Baal and Diablo trapped
Tyraelin thetomb, before galumphing off to free the third brother, Mephisto. The warriors arrived at Tal Rasha’s tomb too late to greet Diablo, but manage to slay the demon Duriel, left by Diablo to guard Tyrael (all these names…) and set the archangel free.

Catching up with Diablo the warriors were forced to battle the demons he summoned, as Diablo himself headed off to free Mephisto from his soul stone prison in the port city of Kurast. Kurast was at this point controlled by Mephisto’s mind-slaves in the high council. So inevitably, the three brothers Diablo, Baal and Mephisto reunited as the warriors caught up and were forced to fight their way through Mephisto’s minions.

Marius had found his way to the lowest levels of the temple under which the three brothers had reunited. Unable to destroy Baal’s soul stone as per Tyrael’s request, Marius fled. Baal decided to leave the temple also, as he had to prepare his army for an attack on the towns of Sanctuary.

After defeating Mephisto’s cronies, the warriors found their way down to a portal that led to hell (where else?), opened by the three brothers. They then defeated Mephisto in an expectedly epic battle. Taking Mephisto’s soul stone, the heroes advanced through portal and gave chase to Diablo himself.

Entering the creatively named Pandemonium Fortress, the warriors came face to face once again, with the elusive Tyrael. The archangel instructed them to find and kill an evil angel called Izual. It turns out that Izual had been a bit naughty and was responsible for instructing the heavens to use soul stones, knowing full well that hell was planning on using the stone’s flaws to free the brothers once imprisoned. The warriors killed him dead.

Proceeding further, the heroes discovered and defeated Diablo. Hurrah! After destroying his and Mephisto’s soul stones, they left hell and pressed on to the Barbarian lands where Baal and his army were busy breaking things.Baalin the guise of Tyrael, meanwhile, tracked down Marius and persuaded him to return his soul stone. Needless to say, Marius was quickly disposed of.

Baal made his way Mount Arreat; the location of the World Stone and his true goal. His intention was to meddle with it such that hell had an all–access pass into Sanctuary. The heroes pursued Baal and defeated him, but were too late as he’d already corrupted the World Stone beyond recovery. Tyrael appeared one final time and concluded that the best course of action would be to destroy the stone, whatever the consequences. He obliterated the stone and the mountain along with it, creating the Arreat crater. It is on this unsettling cliff-hanger that Diablo II comes to an end.