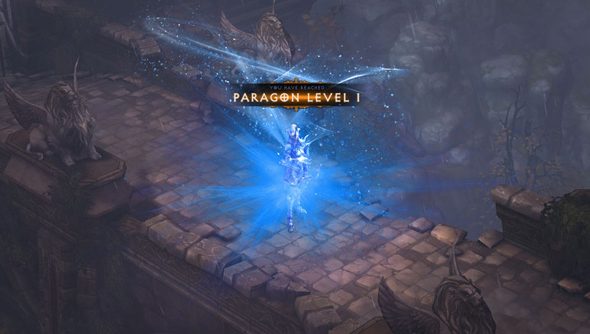 So Diablo 3 has come back online following the patch 1.0.4 update, the most significant feature of which is the addition of Paragon levels. These extra 100 levels kick in once you hit the traditional level cap of 60, offering a sense of progress long after you reach the game’s end. But for how long after? Another 100 levels can’t take that long to earn, right? What are we talking about, a hundred extra hours of meaningful play? Not quite, try a hundred days, for most players. Paragon levels are going to last you a very long time indeed.

Here, as of the game’s launch earlier this year, is how the first 60 levels of the game pan out. The line on this graph represents the amount of XP needed to reach the next level – that is,a flat line would mean that each level would take as long as the last one to reach, a rising line, as seen, shows that each level takes slightly longer than the last. Also clear in the above graph is the huge leap in required XP per level that happens between levels 50 and 60. It’s around that point that dinging becomes rare and precious, and each level gained feels momentous. Note too the actual amounts of XP we’re dealing with. To get from level 59 to 60 requires2.25 million XP, which is quite a chunk. A smoother curve than levels 1 to 60, for sure, but then Paragon levels don’t bestow any new skills and so can afford to be a little more plainly arithmetical by design. You can see that the first 60 Paragon levels are perfectly smooth, displaying linear growth per XP required per level. Paragon level 2 will take twice as long as Paragon level 1, while Paragon level 3 will take three times, Paragon level 4 will take four times, and so on. After Paragon level 60 it goes a bit crazy and jumps up again, becoming tougher and tougher to hit new Paragon levels. But hold on, take a look at the numbers involved: we’re now dealing in hundreds of millions, rather than ones and two of millions. Let’s put regular levels on the same chart as Paragon levels. Look away now if you were planning on grinding patch 1.0.4 this weekend. Levels 1 to 60 effectively vanish at this scale. Paragon levels are gigantic, representing weeks and monthsof long-term play. Don’t expect to hear from the first Paragon level 100 character for a long time. It’s also worth noting that Nephalem Valor now gives a 15% bonus to XP per stack from level 60 onwards, which will accelerate the rate at which you’ll hit levels, but even with this huge bonus you’ll need to invest an astonishing amount of time to make a dent in that XP requirement.

Longevity (assuming, for one second, that an effectively infinite grind can be counted as any sort of longevity), thy name is Paragon.

Thanks to DiabloFans for the numbers.Data can be found here.