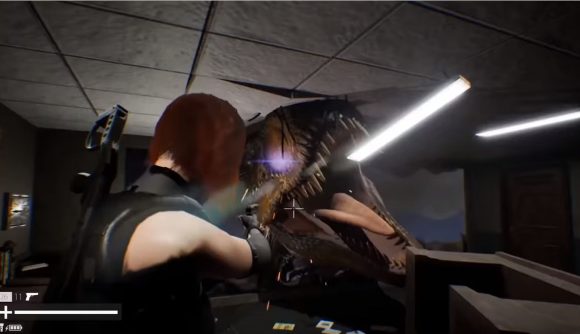 Three months after the first trailer dropped, the team of modders behind the Dino Crisis remake has released its biggest trailer yet, and the first to show some real gameplay.

This new trailer shares very little with the 1999 original surprisingly, opting for a far more mysterious and cinematic approach. Scenes shrouded in, well, shadows and snippets of story are spliced between shots of abandoned hallways. Protagonist Regina is stuck with these dinosaurs and not much else. Rounding out the trailer, we get just a taste of action from a terrifying T.Rex smashing through a window to well and truly corner you.

Calling themselves Team Arklay, those fans are celebrating the 20th anniversary of the survival horror game with their own take on the original Dino Crisis. Initial reception has been split between anticipation and disbelief. After strings of rumoured fan remakes in multiple genres, there are sceptical followers of Dino Crisis who wonder if this remake can live up to the original’s former glory. Others hope that Capcom will be pushed into pursuing their own remake after seeing such excitement from fans.

Despite the frequency of fan remakes being ousted by DMCA notices, Capcom has been fairly lenient in the past with projects made with their IPs. For example, Mega Man x Street Fighter was originally a fan creation which later received production support from Capcom. Mega Man Maker, both a play on Super Mario Maker and the Mega Man series, wasn’t shut down either. If the project continues to grow it’s likely to be noticed by Capcom, however form their history of letting fan creations thrive, it’s possible they’ll just observe from afar.

Despite the sceptics, Team Arklay is clearly serious. Since June, it has been releasing trailers and information on its YouTube channel, showing off new assets and steps towards a fully fleshed out remake. This trailer is the biggest yet, giving us a real feel for the potential of the project.

The original Dino Crisis series spanned five games from 1999 to 2003, and has been rumoured to return under original publisher Capcom on and off for years. But it seems a group of fans and modders got tired of waiting.

There have been several rumours over the years since the release of Dino Crisis 3 in 2003 that the series would return. In 2014, Microsoft’s head of Xbox Phil Spencer quashed rumours that his company had anything to do with a remake, tweeting ‘We aren’t working on DC, it would have to be another publisher if it were true’. The official Twitter account of the Capcom Development team responded to a fan asking about new Dino Crisis content with: ‘If a lot of people wish’ – a rather cryptic way of suggesting a new game isn’t out of the question, given sufficient demand.

For now, fans can enjoy this trailer. And who knows – it might prove the tipping point for Capcom to finally revive the old fossil, to raptor-ous applause.