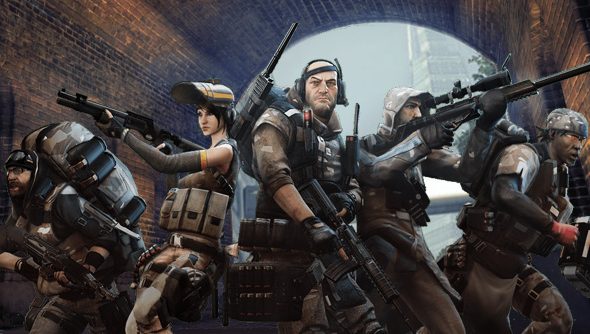 Splash Damage have revealed a fresh and properly meaty chunk of Dirty Bomb footage, showing the multiplayer shooter in action as teams battle around the game’s London Bridge map. The developer’s also detailed the Founder’s Club, a means for players willing to pledge for priority beta access and exclusive in-game content. Alternatively, you’ll be able to play “the core game” for free when it launches.

The Founder’s Club blurb also lists some of the classes to be included in Dirty Bomb, such as “Medic, Engineer, Soldier, Field Ops or Sniper”. Fire Support, Recon and Assault classes can also be found.A free sign up option allows you to reserve a player name, while paid tiers at $30, $60 and $120 deliver rewards ranging from priority beta access up to exclusive “Mercenary” characters, soundtrack EPs, exclusive gun tags and t-shirts.

Founders will be invited to feedback on every aspect of Dirty Bomb’s development. “With your feedback,” Splash Damage write,”you’ll help shape movement, weapons and abilities, and ensure the game’s smooth feel and high skill ceiling. You’ll help test features such as eSports, before launch.”

“Dirty Bomb must provide a balanced playing field and a fair contest, challenging players, against or alongside real people. Players should only succeed by competing in battles where skill and tactics alone determine the winners, be it as an individual, group of friends, or team. Players should always understand why they won or lost, or by being part of a social community that shares knowledge, continually learn from other player’s skills, and achieve status and recognition for their own credible successes and contributions.”