Dirty Bomb is an objective-based multiplayer shooter from developers Splash Damage, the folks who’ve been making invariably excellent objective-based multiplayer shooters for the last thousand or so years. It’s a team-focused first person shooter in which you work together using guns to achieve things, while another bunch of players works together using their guns to stop you.

The free to play shooter was revealed ages ago before slinking back into an epoch-long closed beta slumber. Now that it’s finally re-emerging from its developmental chrysalis, all moist with a nutritious outer sheen and ready to play, I’ve been allowed to have a go. And it’s really quite good.

Dirty Bomb is a mix of many things. Foremost it feels like a first cousin to Splash Damage’s growing family of shooters, the objective-minded Enemy Territory games and the teamwork-heavy Brink. Both of the maps I’ve played, Chapel and Underground, feature an offensive team pushing their way from one end of a map to another, while a defensive team tries to prevent this happening. Objectives act as checkpoints for the advancing team, with each successful objective shifting the spawn points ever farther into enemy territory, a moving frontline that transforms a single map into a handful of distinct and incremental stages.

In Chapel (a map very loosely based on an area around London’s Whitechapel), the advancing team must escort an extraction vehicle along cobbled streets strewn with footbridges and pocked with alleyways and other flanking opportunities. Sticking close to the vehicle will prompt it to merrily chug towards its destination at the map’s halfway point, though the opposing team will be raining down constant gunfire and explosions in an attempt to temporarily disable the vehicle. Once disabled, the vehicle must be repaired before it can trundle off again, greatly slowing the offensive team’s progression and eating into the map’s 15 minute time limit. 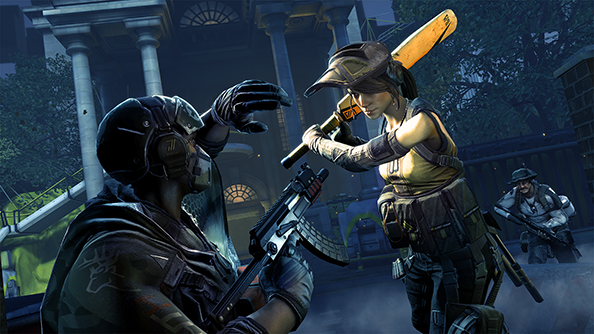 Players from both teams are drawn towards this mobile focal point, with some classes of player better equipped to stay close to the vehicle, while others can be more inclined to hang back, or scoot up and down those footbridges and alleyways, flanking their opponents. Mucking about with different kinds of characters in this map vastly changed the kind of game I was playing: as a sniper I could stay well clear of the carnage around the EV and pick off enemies from a distance, as a heavy I could march alongside the vehicle, minigunning anybody in my way as long as I was well covered by my team mates.

Playing as either side, those alleyways and flanking paths were useful things, frequently dropping me into rooms directly behind entrenched enemy players, who hadn’t yet learned to look behind themselves a bit more often. The maps we played in Dirty Bomb were broadly linear, but they’d tend to branch outwards between objectives, splitting into discrete lanes before rejoining in open arenas. An astonishing degree of thought has gone into map design, enough to necessitate at least a modicum of teamwork.

Our voice chats were mostly concerned with the directions and locations of our enemy as they fought to carry a bomb payload through one of the three routes. Going it alone or holding your tongue isn’t really a viable tactic in Dirty Bomb. 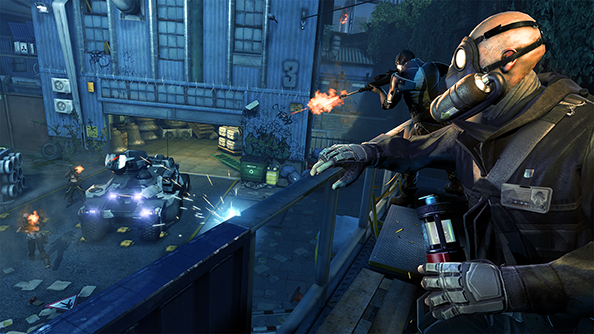 Once that EV reaches its destination, the game mode switches from escorting a thing to a blowing up a thing. Two EMP charges must be delivered to the base of a building at the far end of an open courtyard littered with destroyed vehicles. Carrying the charge leaves you defenceless, another way Dirty Bomb nudges you towards teamwork, so the result is a series of tactical runs on the objective, with rapid respawns generating enough of a relentless forwards push for the bomb-carrying team that just a small lapse in judgement, skill or timing by the defensive force will result in one or both of the EMPs reaching their destination. Running down the clock is the goal for the defenders here, so delaying the EV as much as possible in the map’s previous stage will vastly increase their chances of success.

The second map we played, Underground, is set entirely within an abandoned Canary Wharf tube station. A series of descending escalators grants the attacking team a height advantage as they fight to unlock lower areas of the map. Their objective, for whatever reason, is to flood the place by blowing up the big Flood Everything button on the station’s lowest floor. Again, the defenders are keen to not let the station get wet, so they fight to prevent the button being tampered with. Thick yellow extractor fan pipes and extensive construction work allow players to creep around and flank, with just as much efficiency as in the Chapel map. Similar again to the Chapel map is the manner in which, just before reaching the final objective, the map splits into three corridors, three avenues of attack to be tactically exploited and strategically defended. 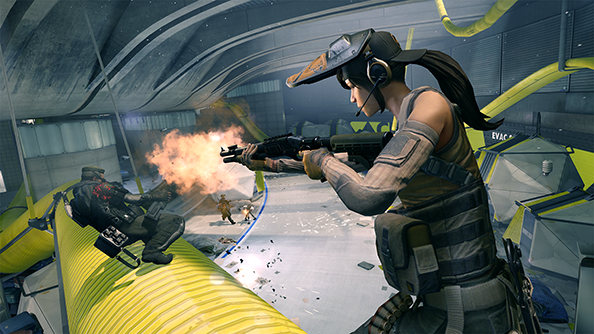 The first objective here is to sit tight for long enough in a small and difficult to defend control room. Walls on either side of this room can be blasted open with C4 by the attackers to allow quicker access, while the room’s skylight allows either attackers or defenders to launch grenades and mines into the room in an effort to explode its occupants. This one-room objective became a sticking point in two of the games we played, as players slowly began to figure out the nuances of combining certain character classes to create near-unstoppable pairings. A heavy deployed in one corner of the room, supported by a medic capable of dropping a healing aura on the floor, became an almost insurmountable force, a dizzyingly effective murderteam that cut down the attackers as they streamed in through the room’s entrances.

There were ways of countering this pairing of players, though this particular attacking team couldn’t co-ordinate enough to achieve them. Classes in Dirty Bomb are called Mercs, and each Merc has their own set of abilities. There were two medics in the version I played, for example. Phoenix was the more selfish of the two, able to revive himself at the push of a button, as well as fire off an area of effect healing blast. Aura on the other hand could deploy a healing aura on the floor which would restore the health of any nearby allies. 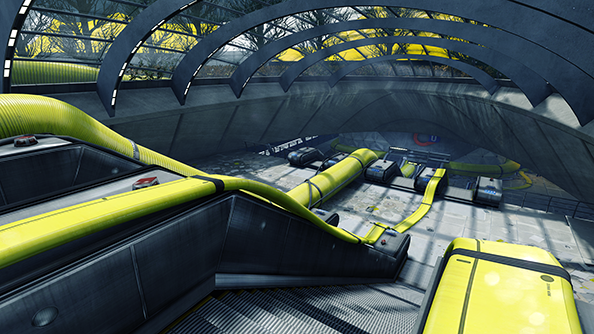 Mercs, and all of their disparate abilities, make Dirty Bomb very interesting. You can take three from your deck into any game and switch between them at will as you respawn. Skyhammer can call in airstrikes, which can be put to devastating use in the Chapel map when the offensive team is clustered around the EV. Stoker is the fire-wielding merc, capable of chucking napalm grenades that not only cause damage but help close off certain routes to the enemy. Nader comes equipped with a grenade launcher, which I would use to knock huge chunks of health out of the EV on the chapel map. Bushwhacker is an engineer who can drop turrets and very quickly repair a disabled EV.

All of these abilities recharge slowly, so skilled players will know precisely when and where to deploy them. Knowing which three characters to slot together too, and then using that team effectively with the mercs your friends have chosen, is critical to victory, as evidenced by our dominating heavy-medic combo in the Underground map. Without the right counter-merc your team is at a disadvantage before the match even begins. All of these mercs are visually (and audibly) unique too, so understanding the abilities of each of your opponents — knowing that it’s perhaps wise to finish off Phoenix before he revives himself and stabs you in the guts, for example — is advantageous. 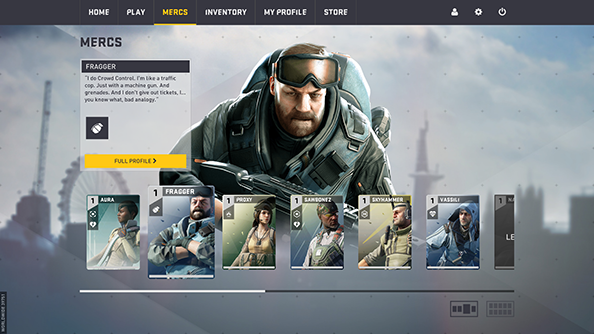 That cheerful cast of characters leaves Dirty Bomb feeling more than a little like Team Fortress 2, crossed with the no-nonsense-ness of something like Quake. Dirty Bomb has the immediacy of a snappy and fast paced, 90s PC shooter, only one that’s been carefully adorned with the objectives and asymmetrical game modes that Splash Damage have been expertly refining over the past decade and a bit.

Dirty Bomb won’t be coming to consoles either, and that, according to Splash Damage, is one of the game’s fundamental strengths. There’ll be no compromises made. Any Xbox controllers plugged into your PC will be forcefully ejected as the game starts up. Any nearby PlayStations will overheat and melt through sheer force of incompatibility. This is a PC exclusive shooter, and a return to Splash Damage’s distinguished roots. Hooray.

Dirty Bomb is currently in closed beta, with an open beta planned in 2015.