It is the relatively nearish future. London has been nastily gassed up by a big old dirty bomb of unexplained origins, and the ensuing evacuation of its citizens means that nobody is allowed into the city centre or on any of the big red buses or inside the tube stations. Nobody, that is, apart from two teams of enterprising mercenaries in search of irradiated sacks of delicious loot.

In Dirty Bomb, you are one of those mercenaries, running around a bunch of abandoned London boroughs in an objective-based and team-focused competitive multiplayer FPS. The shooter launches alarmingly soon, with the previously time-limited closed beta now permanently online and ready to play.

I’ve been playing it, and let me tell you, it’s really rather excellent. Hoo-boy yes indeedy.

Dirty Bomb is being developed by Splash Damage, whose guiding hands have produced some of the finest objective-based team shooters in the PC’s history. They have, essentially, been making the same game over and over again, from Wolfenstein: Enemy Territory to Enemy Territory: Quake Wars to Brink, refining a unique kind of multiplayer shooter that reinforces teamwork and cooperation and shooting and guns.

But where Brink’s ambition and innovation were undermined by its fun-averse and sluggish stalemates, Dirty Bomb is the purest expression yet of the kind of FPS Splash Damage keep trying to make: it’s fast and hard, it’s PC exclusive, it’s free-to-play-but-not-in-a-shit-way, it features perhaps the best designed multiplayer maps outside of Team Fortress 2, and it stars a roster of compellingly skilled and remarkably varied characters. 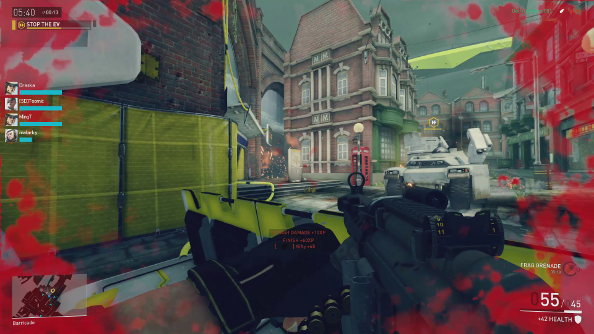 The game pits two teams of five players against one another in one of a number of different modes. The primary game mode, Stopwatch, has one team attempting to accomplish a series of objectives while the defensive team attempts to prevent or slow their progress. These objectives are typically map-based, such as conveying a vehicle from one point to another by repairing and maintaining it as it slowly crawls through alleyways and lanes. Or breaching a wall by planting C4 and defending the timed explosive while the opposing team attempt to disarm it. There are objectives that have teams running into heavily fortified buildings to retrieve MacGuffins and return them to specific points on the map.

In doing this Dirty Bomb neatly mixes together all kinds of familiar game modes — capture the flag, escort, king of the hill — into one dynamic whole, with the pacing and structure of each game evolving as objectives are won and lost. Once one team completes their objectives, the roles are reversed and the opposition are then tasked with beating the now-defending team’s time. 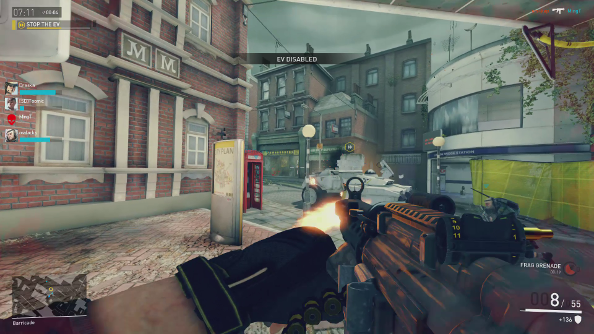 There are a few stalemate-breaking side-objectives available in each of the maps I’ve played, tasks that will aid or hinder a team’s attempt to move through a map. The first map in the beta, Terminal, is roughly based around the Waterloo area of London, with branching routes that wind around Lambeth North tube station before converging on the iconic train station. The primary objective here is to first explode a defensive wall before planting C4 charges on two crates filled with mysterious digital secrets and, probably, sexy Snapchats. A side-route can be opened for the assaulting team by powering up the station’s extractor fans and clearing a room of noxious green gas.

Then there’s Bridge, which has one team repairing an extraction vehicle and escorting it to a towering glass medical facility where it can blast open the building’s fortified entrance. Once the facility’s defences are down, the assaulting team rushes in to grab two drug samples and return them to an extraction point. The defending team has the option to deploy roadblocks to slow the approach of the extraction vehicle, which also helps to hold the assaulting team at a difficult to defend choke point on the map. 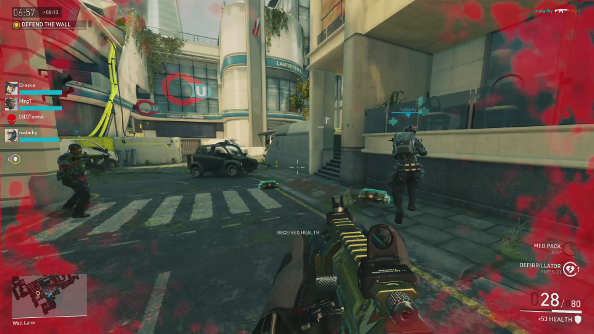 Since playing it last, the fundamentals of Dirty Bomb’s gunplay have been refined and tweaked. Shooting people until they are dead feels incrementally better than it did before, in a subtle way that’s difficult to place a critical finger on. You can take a fair amount of damage before you die, for example, meaning that you’ve enough time to find cover and summon the help of a medic if you find yourself under fire. But the obvious flipside to this, that your enemies should conversely feel like they’re taking too many shots to kill, isn’t true here. Your opponents die after absorbing what feels like a satisfying amount of damage: a couple of sniper shots, a direct grenade hit or a half a clip of machine gun fire.

There’s a delicate and invisible balance that’s been expertly struck deep within Dirty Bomb’s wiring, a set of secret variables that have been tweaked to near perfection and leave the game feeling really, really quite fun to play. 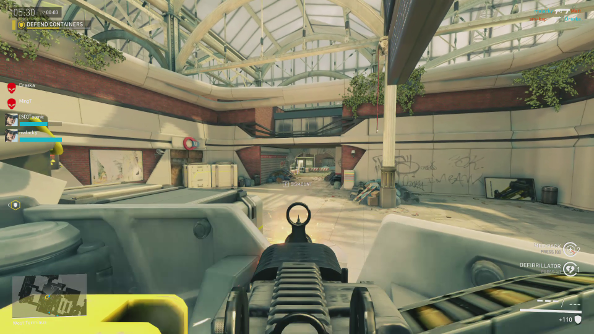 That clever balancing extends to the myriad tactical possibilities afforded by Dirty Bomb’s cast of mercenaries. Each one has his or her own superpower, from a medic that can revive himself, to an engineer who can drop turrets, or an assault merc who can call in airstrikes, or a grenadier who runs around with a constantly replenishing sack of underslung grenades. The playable characters here are about as distinctly skilled as Team Fortress 2’s well-defined roster, though they perhaps lack the same cartoon charm. You’ll find yourself selecting “that medic who can drop the area of effect healing thingies” sooner than you’ll remember the merc’s name.

The loadouts, weapon variants and passive buffs of these mercs are determined by whichever loadout card you’ve applied to that merc before the game. These cards come in several different ranks, from the very rare gold loadout cards to the common as muck lead cards. This is Dirty Bomb’s moneymaker. Cards are found in crates, which are generously rewarded after each game finishes. But crates can also be bought using the in-game currency, which can itself be bought using real money. Whether purchased or earned through normal play, all crates have an equal likelihood of spitting out the shiniest and best new loadout cards. New mercs can be unlocked with cash too, though Splash Damage say that free mercs will be placed on rotation, making it possible to experience all of Dirty Bomb’s content without paying a penny. That seems fair.

I like Dirty Bomb, with its airstrikes and wall-jumps and its bizarro London setting and its wipe-clean-clinic meets cobble-and-brickwork aesthetic. It looks and feels good. It would probably smell good, if polygons had smells. But that smell-less backdrop and the poisoned metropolis in which the game is set play second fiddle to a sharp, precise and finely tuned mouse-and-keyboard shooter, an FPS that wants to rub elbows with giants like Counter-Strike and Team Fortress. One of those shooters that people get really good at in a way that makes it impenetrable for idiots who are bad at games like me.