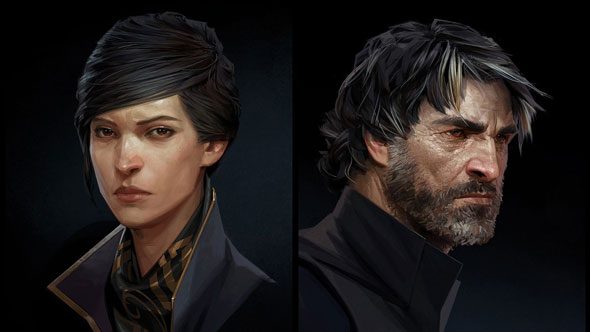 We’re fast nearing the launch of Dishonored 2 – a game that I sneakily suspect could nab the Game of the Year gong. (You heard it here first if I’m right. If not, just pretend I never mentioned it, yeah?) But before we get all carried away, there’s a crucial question that remains: How different is the experience as each of the two player-characters?

Have an eye for great games, do you? Try our favourite PC games to play right now.

The game’s creative director Harvey Smith already said that you need to play Dishonored 2 twice to understand it, which is a little disconcerting for those of us who don’t have the time to finish, let alone replay, even the most wonderful games (Geralt, I’m sorry). Many of us will only be playing through its 15(ish)-hour campaign once, so the decision of who we pick is a biggie. 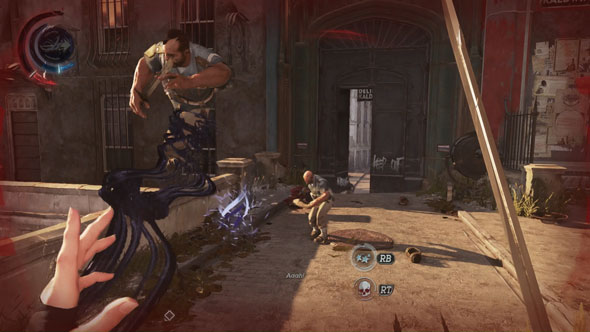 On the one hand, there’s trusty old Corvo – the man in the iron mask who introduced us to the joys of Blinking (teleporting, for you philistines who haven’t played the first game) and rat possession. Then there’s Emily, the young empress from the original Dishonored who has now grown into a deadly-cool assassin with her own set of unique skills. Who do you go for?

I’ve played through a single mission as both Corvo and Emily so you don’t have to (not that you wouldn’t want to), and can confirm that the two are quite different. These are my thoughts on them, both mechanically and narratively. May it guide you to choosing the character that’s right for you…

Pick Corvo for the classic experience, or Emily for a swathe of all-new skills

The original Dishonored pulled a the fine balancing act in offering appealing ways to play both aggressively and stealthily. Corvo’s bag of unique magic tricks, along with a solid, satisfying melee combat system saw to that. But with the new abilities proffered by Emily Kaldwin in Dishonored 2, it quickly became clear to me that she’s the slightly stealthier, more creative character, making Corvo look a bit brutish by comparison (even though all his classic moves are still intact).

I play through the Clockwork Mansion, the fourth mission in the game comprising a beautiful steampunky deathtrap filled with rooms that transform and shift around the house by way of giant cogs. It looks incredible. Corvo’s three abilities for this level are Windblast, Blink, and Bend Time. Blink is, of course, the classic teleportation trick that’s great for confounding and flanking enemies, though the AI seems more vigilant and wary of the trick this time round. 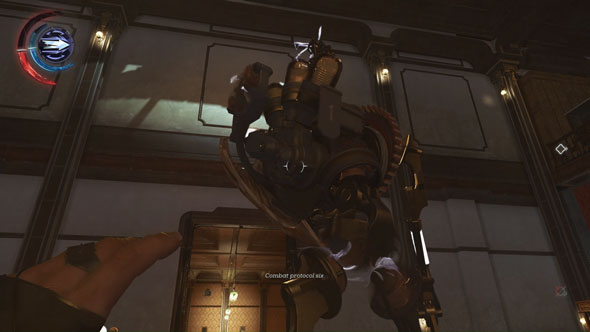 Pulling off a successful Blink mid-combat is tougher, and I find myself relying heavily on time-bending to give myself the advantage, making peace with the reality that I’m fighting my enemies face-to-face a lot more here than before. Maybe I’m just out of practice, or maybe Corvo’s 15-year diet of whale fin pastries and Hagfish caviar (or whatever the social elite of Dunwall eat) has made him a little more heavy-footed than before.

Emily is more graceful, but to define her as the ‘stealthy’ character doesn’t do justice to her inventive array of powers that are as playful as they are lethal. Her three abilities for the same mission are Shadow Walk, Far Reach and Domino. The first of these is the stealthy one, turning you into a shadow-creature that scurries along the ground like an alien (as in Ridley Scott’s Alien). It won’t help you escape combat, but if you want to get around quickly while staying undetected, or close ground on an unaware enemy before gutting them, this is the way to do it.

I play as Corvo first then as Emily, and the real fun across my playthroughs starts when I begin toying with Emily’s Far Reach and Domino abilities, which showcase the new heights of murderous creativity available to you in Dishonored 2. Far Reach is similar to Blink, but if you use it to target an enemy it throws them into the air and reels them in towards you.

Domino lets you tag enemies so that if you kill one of them, they all die in the same way. I quickly become fixated on seeing how many enemies I cad Domino together before trying to slice one of them in half and watch all of them meet the same comically grisly fate (I manage four), or throwing an enemy in the air with Far Reach and skewering him on my blade as he falls.

Corvo’s moveset has nothing on this, and for me feels a little creaky, a little old-fashioned compared to the fresh, flashy moves of Emily. But maybe all this is the developer’s intention, as Dishonored 2 has an air of ‘passing the torch’ from the character who kickstarted the series to the one who has risen from a symbol of innocence to a cold, compelling protagonist who I’m dying to know more about.

Pick Emily for a lead role in the story, or Corvo for a supporting turn

Everything about Dishonored 2 presents it as ‘The Emily Show’. From the earliest trailers showing off her sinister abilities, to the plot, by way of her actual gameplay, the spotlight is firmly on the assassin empress. Meanwhile Corvo continues doing what he does best, serving his master and lurking in the shadows (he’s never cared much for the spotlight anyway).

10-year-old Emily’s wellbeing was a focal point in Dishonored; her doodlings – which would be sunny and sweet or dark and violent depending on how you played – stuck with me as a poignant, vivid indicator of Corvo’s powerful influence on the young empress. As a returning player, I want to spend some time in her mind, learning about her through her internal monologues and little asides to try and get an idea of how she turned out, which will in turn give clues as to how Corvo went about the events of the first game canonically.

Not much is given away about Emily’s psyche in my playthrough, though her comment at the start of the mission – where she admires the beauty of the Clockwork Mansion and hopes that she can deal with her target in a way other than killing him – suggests that there is some compassion beneath that icy exterior. 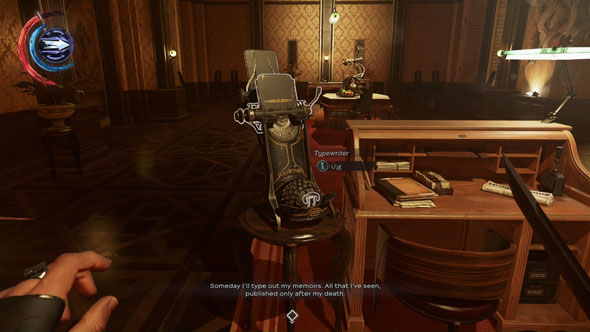 Inevitably, only one of the two parallel campaigns will be canonical and, based on just about everything I’ve seen, that’s likely to be Emily’s. Arkane may solve this by converging the two characters for crucial story moments, though this would undermine all the solo actions and assassinations you’ll be performing in between. However Arkane decide to solve this narrative conundrum, it had better not end up with the two stories existing concurrently in a quantum physics-y “There’s always a girl. There’s always a lighthouse” fashion – we’re still recovering from the last time a game did that…

That’s not to say that Corvo’s story will be trivial. There are, after all, 15 years of his and Emily’s lives to catch up on. During my playthrough there were hints that we’ll get filled in on both characters’ inner workings through little interactions with the environment. Prod at a typewriter as Corvo, for example, and he will muse about writing his memoirs; do it as Emily, and she’ll wistfully bemoan how there’s no way she can send letters to any of her friends. Small insights, sure, but they tease the possibility that Dishonored 2 is as much about learning as the characters’ pasts as it is about setting them up for the future.

As someone still full of love for the original Dishonored, I was all set to stand by my boy Corvo when I first heard about this character choice malarkey. But based on my playtime, Corvo feels like the old dog with an old repertoire of tricks – paw, bark, jump – while Emily is the impressionable new pedigree pup capable of pulling off backflips, jumping through fire-hoops, or backflipping while jumping through fire-hoops. 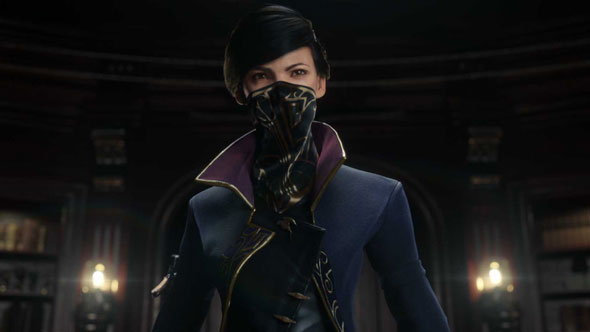 The canine analogy extends to the story itself, if you’ll permit me to stretch it that far. Corvo looks likely to continue in his role as a loyal, subservient guard dog to his daughter and empress; after the many hours I spent protecting and nurturing Emily in the first game, I’m now ready to reward myself by being this person who Corvo’s completely given himself to. It’s almost as if playing Emily is doing justice to Corvo’s efforts in the first game, because now you get to admire his ass-kicking progeny.

There’s still a gritty charm to Corvo, whose moves – which were so jaw-dropping back in 2012 – now feel like the rough-and-tumble tactics of an old-school brawler next to Emily’s slick new skillset. His comparative stiffness makes him more of a challenge, and there’ll probably be people in the Dishonored old guard who’ll stand by him. But knowing that I’m a ‘single playthrough’ type of guy, I’m set on the Emily come D-Day (November 11), and I like to think that if Corvo was standing over my shoulder as I picked her, he would approve.

Who will you choose? Let us know below.