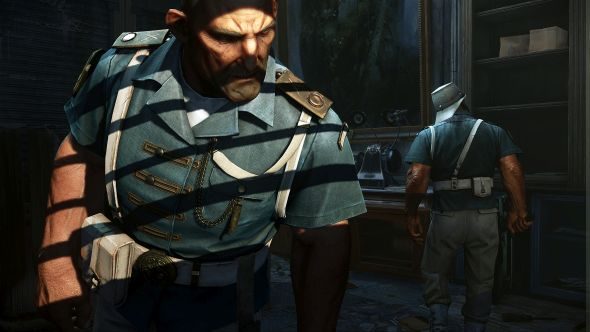 If you’re excited for Dishonored 2 but sadly not in Texas, you’re out of luck in seeing the latest footage from Corvo and Emily’s assassination adventures. However, the next best thing is Bethesda’s explanation of what they showed to their most dedicated fans at the annual QuakeCon, which we’ve summarised here.

For all your other Dishonored 2 needs, including release date and pre-orders, we’ve got you covered.

Corvo is, basically, far more destructive. Blink can now be used to target individuals and kill them immediately. He can freeze time to shoot off limbs in safety, as normal, but new upgrades allow slow progression rather than returning to normal pace immediately. This is used to especially tricky effect to move targets around without killing them.

There was a new path shown for the same mission Emily was on during the E3 demo, which involves going after a different target. This opens up almost an entirely new level, with different enemies and obstacles.

Setting got its time too, showing more interiors and massively tall buildings. If you’re interested, have a read of the full post – we never did see the Doom footage from QuakeCon’s past, but it’s possible we’ll see Corvo’s adventures soon in the lead up to release.