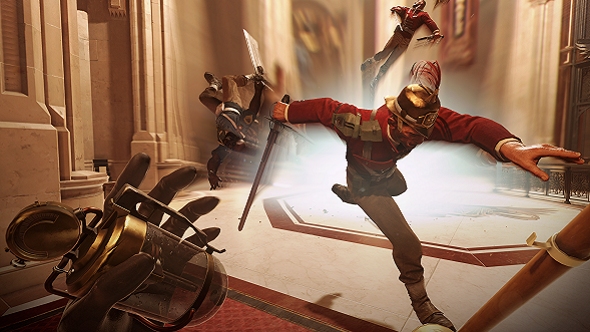 What better way to show off your game than to get one of the world’s best to play it for you? That’s exactly what Bethesda have done for Death of the Outsider, the next instalment in the Dishonored series.

Find out how one of Dishonored: Death of the Outsider’s writers was hired for her excellent Twitter game.

Bethesda have got together with YouTuber StealthGamerBR to debut some footage of what you can get up to in Dishonored 2’s expansion. Death of the Outsider sees you return to Karnaca, this time playing as assassin Billie Lurk.

In case you weren’t already aware, StealthGamerBR makes videos of stealth gameplay for games like Far Cry 4, Metal Gear Solid V, and the Dishonored series. You can check out their channel here, for some very impressive, very bloody videos.

Their Death of the Outsider video is no exception. In a (very) high Chaos runthrough, StealthGamerBR carves their way through the streets of Karnaca in the game’s second level. In case you’re worried, the story details are pretty thin on the ground, but there may be some pretty minor spoilers if you were planning on going in blind.

The focus is very much on Billie’s tools of the trade. Stemming more from Emily’s more magical powers from Dishonored 2, Billie can conjure distracting familiars, steal people’s faces to move around without arousing suspicion, and even stop time to plan her next move through the level. Of course, if you’re feeling less imaginative than all that, you can also lob a bottle at someone’s head and then cut their throat as they stagger back to their feet. StealthGamerBR rattles through a level that might take me upwards of 45 minutes of careful planning in just under ten, leaving a trail of blood and chaos in their wake.

Dishonored: Death of the Outsider is out on PC, PS4, and Xbox One on September 15.