Update November 10, 2016: In the light of numerous reports of poor performance, we’ve tested Dishonored 2 on a different spec machine. Check at the bottom of the port review for our new findings.

Another week in late 2016, another blockbuster released on PC. This time it’s Bethesda and Arkane’s hotly anticipated sequel, Dishonored 2. Planning on picking up the steampunk sneak sim? Then you may want to know how it runs on PC first. Come with us into the shadowy realms of lighting options and texture presets as we guide you through Disohonored 2’s PC performance.

As one of the most beautiful games of the year we decided to put Dishonored 2 through its paces on our monster machine; the one we use to record 4K gameplay. As such, we’ve included performance notes for both 4K and 1080p resolutions. To keep results a bit more applicable to most current machines though, we disabled SLI on our GTX 1080s so just one of them’s doing all the work.

Dishonored 2 is build on entirely new tech. Where its predecessor used Unreal Engine 3, this year’s sequel runs on the Void engine. A bespoke technology from Arkane with roots in the id Tech 5 engine, it still produces that beautiful painterly effect. 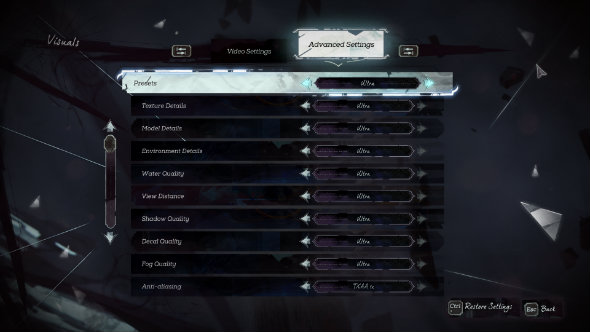 The graphical options menu is nice and plentiful. 16 different settings can be adjusted, with seven of those being on/off toggles for things like shadows and volumetric lighting. The rest, like texture, shadow, and decal quality, can be adjusted through the traditional ultra – low scale.

You can bypass the fiddling with graphic presets, which is the place where Dishonored 2 really impresses. Instead of the industry standard of four options, Arkane have included six. On offer are ultra, very high, high, medium, low, and very low. There’s genuinely an option for every PC; those with hardware just below that required for ultra need not settle for just high anymore. 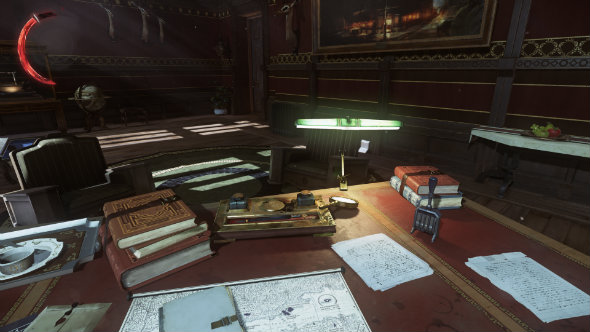 Talking of ultra, you can see above that Dishonored 2 looks quite gorgeous at its highest settings. It’s a very different look to the other games we’ve been playing recently, though. Rather than crisp, ultra-defined textures, Dishonored 2’s watercolour-like artwork provides a more impressionistic approach to visuals. You’ll notice that the pages in the books are a little wishy-washy.

But there’s plenty of beautiful detail to behold in this Victorian office. Look at the gilded pattern along the leather panels in the desk, which come complete with coffee cup stains. Light streams through the windows in god rays, and the desk lamp glows.

At 4K it runs admirably, too. In quiet corridors you’ll hit 60fps, and that’s easily maintained if you’re planning to take things slow and stealthy. Pull your sword out and get into a brutal melee and there’s a dip down to the mid 30s, but it’s certainly not unplayable.

At 1080p framerates soar to 110fps when the pace is slow, and drops to 75fps in times of heavy violence. 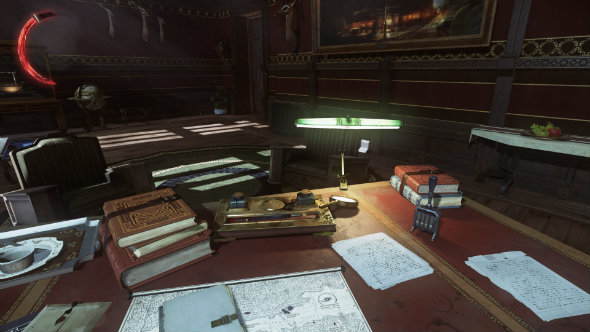 Between ultra and high (pictured above) is the very high preset, in which you’ll notice very little degregation in image quality. High looks pretty great, too. In fact, as far as my eyes can see, there’s near enough no difference between high and ultra. Does dropping the settings result in better performance though?

At 4K you can pick up the princely sum of five more frames, with our counter maxing out at 65fps and dropping down to 40fps during combat. Not a huge gain, but at these lower figures those extra frames are very welcome indeed.

1080p is a much smoother experience, ranging between 110 and 75fps. That’s identical to the performance we witnessed using ultra settings though, which comes as little surprise considering how similar the image quality is. 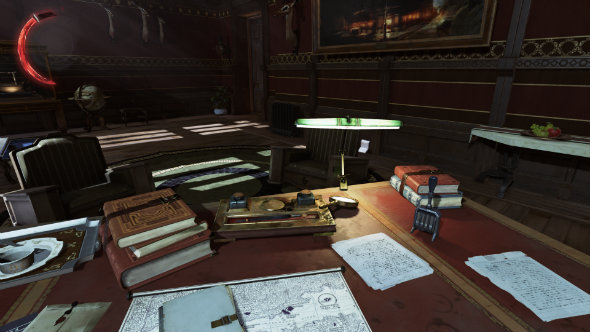 Drop down from high to medium and you’ll instantly see the difference, even through the translucent menus. The lighting takes a huge hit, with the entire scene becoming much darker. It appears this is due to the table lamp being removed as a light source. While the lamp does look to be turned on (really?), it’s not casting a warm glow around the bulb, nor does light pool on the desk anymore.

It’s also the setting where you can see a real downgrade in texture quality. The pattern on the table is now smudged, and the leather grain lacks definition. The overall artistic style remains mostly intact, but it’s now feeling a little more like Dishonored than Dishonored 2.

In exchange for such a drop, you can run the game in 4K at between 67 and 44fps. It’s a very small gain, and arguably not worth the large sacrifice in image quality.

The gains are similarly slim at 1080p, with the range being 112 – 77fps; just two frames better than you’d achieve with the high preset. That’s not going to make a difference to your experience, but the better graphics offered by higher presets certainly will. 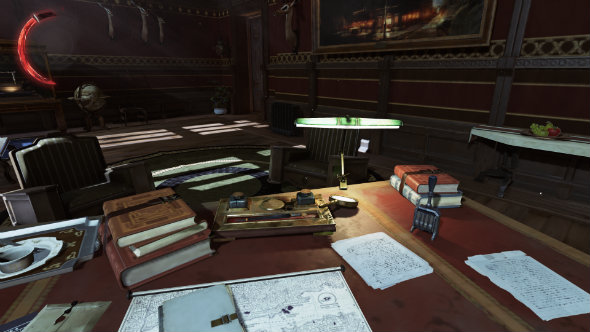 The above screenshot shows Dishonored 2’s very low preset, the most basic the game can look. Again, the hit is all in the textures: those details on the table now look more like smeared chalk than elegant, beautiful gold patterning. But it’s not just in the small details now: if you look at the wooden dado rail that runs around the walls of the room you can see that any definition to the engraving is completely lost at very low settings. You can gain that engraving detail back by switching up to low, but that is about all you’ll rescue.

4K performance tops out at 73fps and drops to 44fps when things get busy, meaning that while there are gains to be made, they’re not significant enough to justify playing the game at these settings.

Going ugly has better results at 1080p, but only when you’re creeping around quiet corridors. You can hit up to 137fps, but during violent moments you’ll be dropping as low as 80fps; just three frames more than the lowest count at medium settings.

For Dishonored 2 it’s all in the details. As a game that you spend so much time in crouched and observing the environment, those details are more important than ever. In a pacey FPS you can forgive the lace on a tablecloth for being a bit ropey, as you’ll be running past it so fast that you’ll have forgotten its rough edges before it’s a yard behind you. With Dishonored 2 though these details are up in your face all the time. It’s a game that not only deserves to look good, but needs to look good.

You can see in the images below the stark contrast between ultra and very low settings. The curtains completely lack their pattern at very low, and the woodgrain on the cabinet and windowsill is reduced to a muddy swirl of brown hues. Even the wallpaper decals are wiped out at very low. Simply put, the beauty of Dishonored is completely lost at its lowest preset. 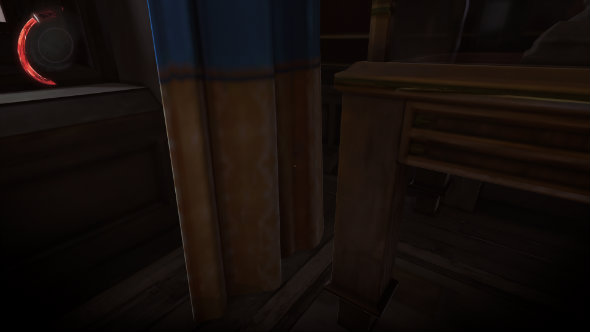 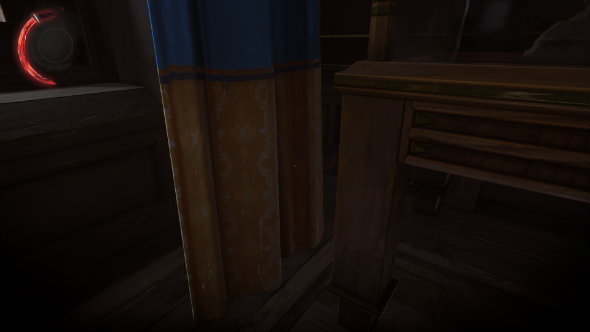 I was really impressed when I found Dishonored 2’s six different presets in the graphics menu. It’s something I’ve not seen before in a big triple-A release, and it’s an extra level of control for PC gamers. It’s disappointing then to discover that the lowest presets drastically reduce texture quality in exchange for very small performance gains. It’s not enough to make anyone angry, but it does mean that Dishonored 2 is not going to be suitable for anyone with aging or weaker hardware.

Aside from that though, Dishonored 2 runs great on PC. Even at 4K you can achieve playable frame rates, and at the standard 1080p you can enjoy a really smooth ride. It looks absolutely gorgeous too; one of the most visually sumptuous games of the year. If you’ve been debating what platform to play on, we can wholeheartedly recommend playing it on PC. Provided your machine is up to the challenge, of course. 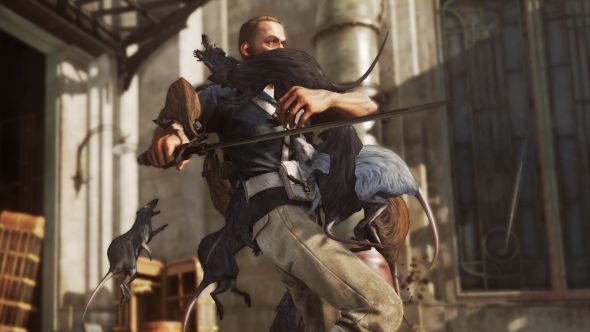 During the first day of Dishonored 2 being out in the wild there have been numerous reports from both press and players regarding poor performance. In light of this we decided to test the game on one of our more modest machines.

The results, while not as great as those on our 4K machine, are nothing to be alarmed by. At 1080p using ultra settings Dishonored 2 is a very playable game. The frame rate generally settles around the 50-ish mark, which while not being the gold standard is certainly not an awful rate considering how populated its levels are. It’s a seriously detailed game, and those numerous elements will take their toll.

Dropping to lower graphical options results in a small but respectable rise in frame rate, and at their lowest settings it’s easy to play at 80fps. It’s not triple figures, but there’s no judder to ruin the flow.

Turning the resolution up to 1440p causes the most impact, with the game running mostly at 30-40fps at ultra settings. For some people this will be unacceptable. But if you’re happy to play at a more console-like frame rate, the image provided by 1440p is certainly a worthy tradeoff.

If your machine is similarly specced to either of our test rigs then you should be all clear for a great time in Dishonored 2. But do be aware that people out there are having problems. If you’re unsure, it may be wise to wait on driver updates and a patch from Arkane.