New Dishonored 2 gameplay was broadcast for the first time on Twitch yesterday, in which Arkane Studios’s lead designer/producer Dinga Bakaba and creative director Harvey Smith showed off and discussed some of the changes to gameplay made since the original.

Want to know even more ahead of release? Here’s everything we know about Dishonored 2.

Watch live video from on www.twitch.tv

The stream began in Karnaca, with Dinga playing as Corvo. He pickpockets a guard, chokes another from behind, Blinks with his body into a dark corner, hides it, scopes in on another target using his mask, then Blinks up to a balcony and out of sight.

So far, so Dishonored. This is all comfortingly familiar. What’s new are the aesthetics: the guards wear powder blue uniforms with white cloth caps, like Napoleonic French foreign legion soldiers. The buildings are made of gold stone, adorned with plant boxes and wrought iron railings. It’s a very Mediterranean look, Smith confirms, distinct from Dunwall’s grim greyness.

This enables a whole new layer of gameplay. In keeping with coastal towns in Spain or Italy, Karnaca is full of balconies and flat rooftops for you to explore. Its technology is also distinct from Dunwall’s; after intense hunting, whales are getting rarer, so whale oil batteries are less common. Instead, Karnaca is powered by wind; it sits in the lee of a mountain with a cleft through it, which focuses wind into strong gusts that pass over the city. 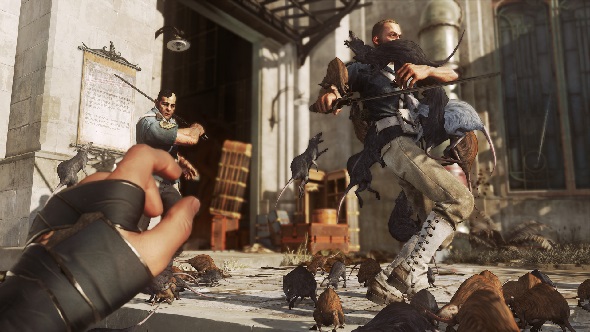 Smith navigated Corvo past a Wall of Light powered by a windmill, explaining that you’ll be able to destroy its blades with grenades or throw a brake to stop its rotation. But Corvo has an additional trick; fans of the original will remember his Wind Blast power. Corvo can use this on windmills to “overheat” whatever they power.

If you don’t fancy making any use at all of such witchcraft, however, you can choose a ‘no powers’ mode. You got an achievement in the first game for completing it without powers, but in the sequel, you can actually say no to the Outsider when he offers to mark you, and you’ll get none of his gifts at all.

But it sounds like you’ll be missing out on a lot of fun if you do. Powers are now upgradeable and branching, and Blink in particular has a ton of new uses attached to it. You can combo Blink with a kick, Blinking into guards and kicking them as soon as you come out of the animation, which looks incredibly satisfying.

Dinga talks about how there’s been a focus on making movement more fluid: there are new animations for vaulting obstacles, you can Blink while vaulting, and you can now chain moves one after the other, for example vaulting into a slide into a double jump, and so on. There will also be contextual combat uses for these moves, so if you vault an obstacle with a bad guy behind it, you can kick him out of the vault. 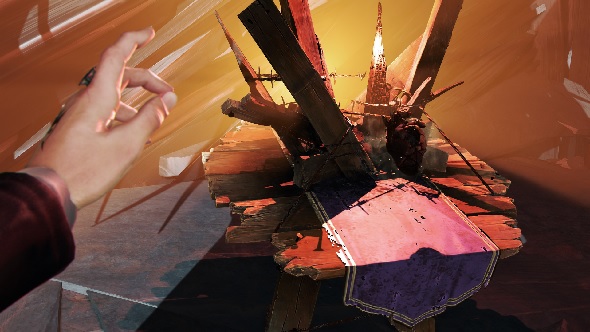 Another touch we liked was the return of The Heart. You can still use it to track down runes and bone charms, and to unveil contextual information about the world, but this information now gives insights into the morality of NPCs. Some guards, for instance, might be decent folks just doing their jobs, some are petty sadists on a power-trip, while others may be truly evil serial killers. Depending on their own morality, actions you take with respect to them will have a variable impact on the ‘Chaos’ rating of your world. Perhaps killing or disabling an evil guard will make your world better?