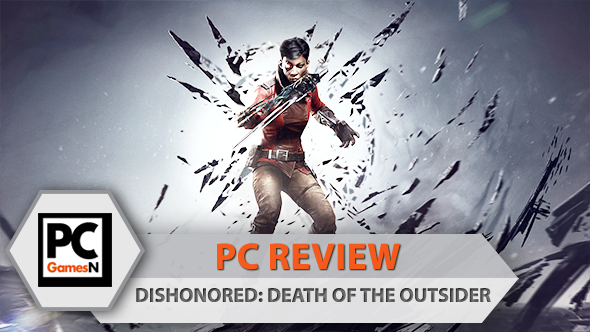 Dishonored began with a political assassination. All the main players were there: Corvo, Emily, Daud, and Billie Lurk. The whole gang. The Outsider watched on from the Void – a world between worlds, just beneath the water’s surface; an obsidian reflection where the dead whisper. This black-eyed deity granted the assassination party their supernatural powers, and he did the same for Corvo when he looked for revenge on the ones who killed his lover. But does the responsibility of the ensuing murders lie at The Outsider’s feet, or is that blood really on the hands of the people wielding these otherworldly gifts?

Stalk across the high ground in our list of the best stealth games.

That question has been on Dishonored’s lips ever since the first game judged us for knifing too many people in its rat-infested back alleys. In Death of the Outsider, it’s finally answered – though it’s up to you to form its conclusion – as Arkane close the book on Daud, Billie, and The Outsider himself.

Characters’ powers always reflect their personalities in Dishonored. Corvo is an immigrant in a foreign land, so he can experience what it’s like to be a local via Possession. Emily is an empress, so she’s granted control over people’s fates, linking them together with Domino and conjuring up an expandable body double with Doppelganger. Death of the Outsider’s protagonist, Billie Lurk, grew up as a street urchin, so she can talk to Karnaca’s rats, scout ahead with a spectral form, teleport away from danger, and wear other people’s faces to gain access to restricted areas. She’s 38 years old, hardened by a lifetime of thievery and murder, and her abilities mirror that. She’s also not afraid to hide in a bin or eat discarded figs straight from the floor. Tasty, tasty floor figs. 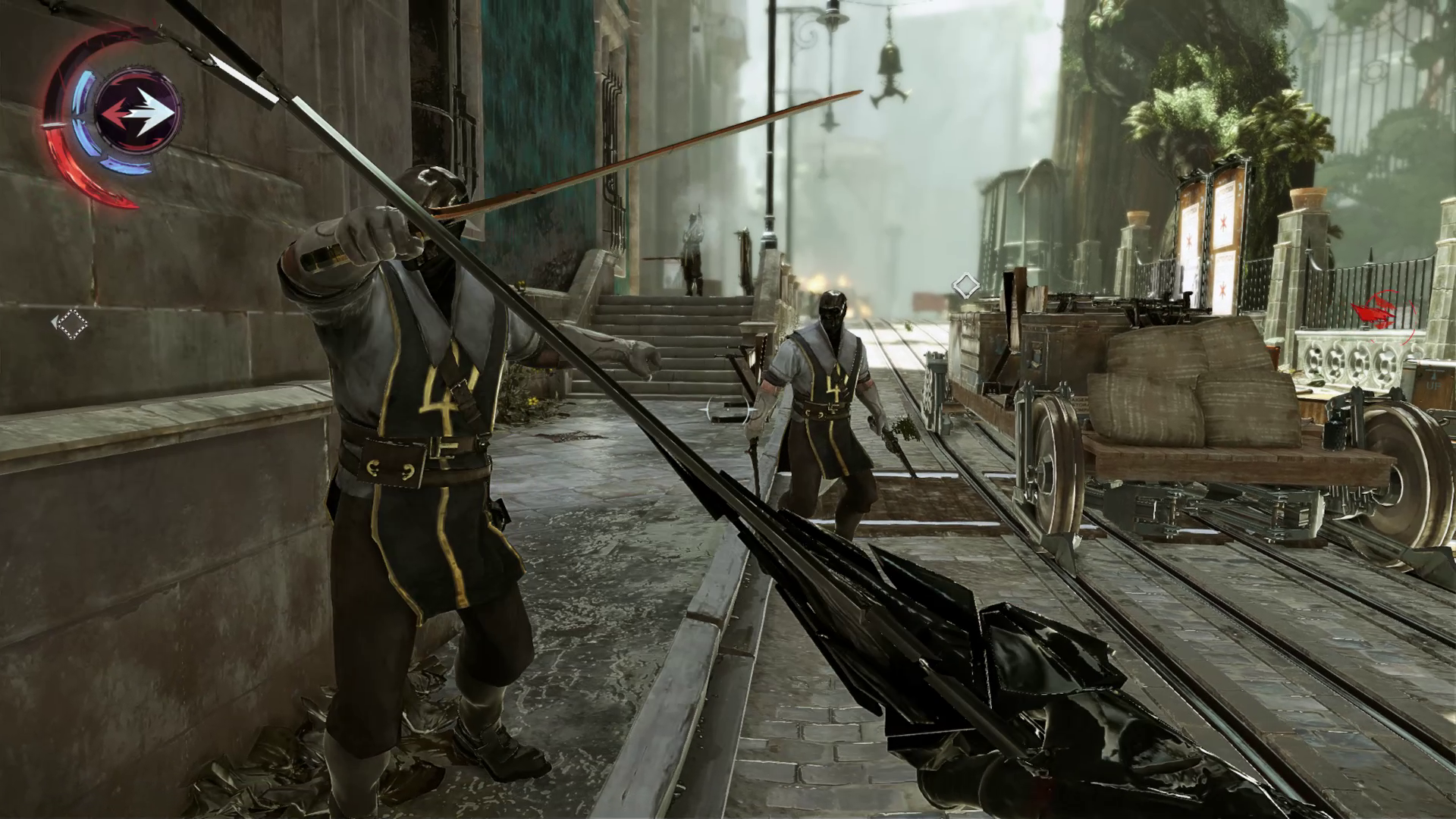 You see, there’s a cohesiveness to Arkane’s worlds, from Prey to Dishonored, and that attention to detail carries through to Death of the Outsider. Take the first mission, which tasks you with freeing Daud from an underground boxing den. As you make your way in, you can hoist yourself up into a room containing plans for fixing fights. In there, on the desk, there’s a Bonecharm that you can equip, and it makes your opponents miss more often. These hoodlums had clearly been using it to rig matches, but now it’s yours. Every room is a story, and every prop in the world is placed with care, in the hope of reinforcing these stories.

For Dishonored veterans, this might sound like bloody (or not) business as usual, but Death of the Outsider does tweak a bunch of the series’ fundamentals. For starters, there’s no mana-management. You don’t need to stay stocked on mana vials to use your powers here – instead, you have three chunks of mana that quickly recharge after depletion. It means you can’t spam too many powers in succession, but you don’t have to ever worry about running low on juice. It’s a much better system. 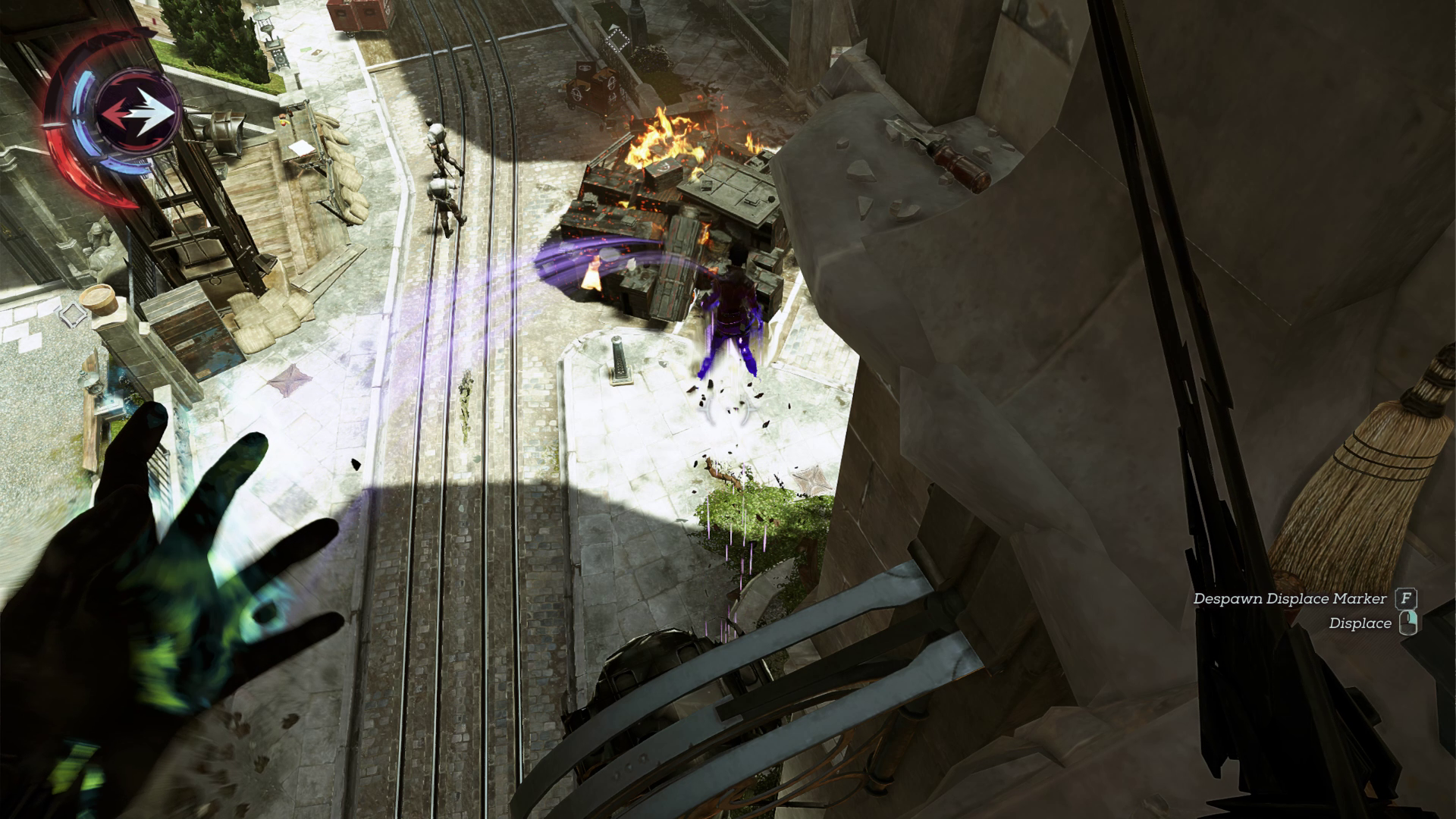 Elsewhere, you only have the three powers: Displace, Semblance, and Foresight. In previous Dishonored games, you’d have to use the Heart to search for Runes – like a sinewy, talkative radar – then use those Runes to unlock and upgrade your powers. There are no Runes here. Billie doesn’t have the Mark of The Outsider, you see – she feeds on Daud’s power. It makes sense to the story, and improves exploration, making it feel more organic. You can make minor upgrades to Billie’s moveset by finding Bonecharms, though you have to actually find them this time – you’re not just chasing UI markers. These can be small tweaks like the aforementioned fight club trinket, or they can be major, such as one that adds a short period of invisibility to Displace, your teleporting ability, at the cost of reduced range. The fact you’re not searching for markers solves one of Dishonored’s longest-held bugbears and further pulls you into its immersive, stylised, and wonderfully-detailed vision of Karnaca.

On top of these clever tweaks, mission objectives are different. Dishonored has always been built around assassinations, but Death of the Outsider gives us only one target: the eponymous god. Over its five missions, you work towards this goal, gathering intel and stealing the supplies needed to do the deed. The majority of the game plays out like a superpowered Thief, and its best mission asks you to pull off a bank heist on a huge building kitted out with security devices invented by Dishonored 2’s Jindosh. From the lore-laden planning phase to the execution, the entire mission easily stands among Dishonored’s best, securing a place alongside Lady Boyle’s Last Party and the Clockwork Mansion. 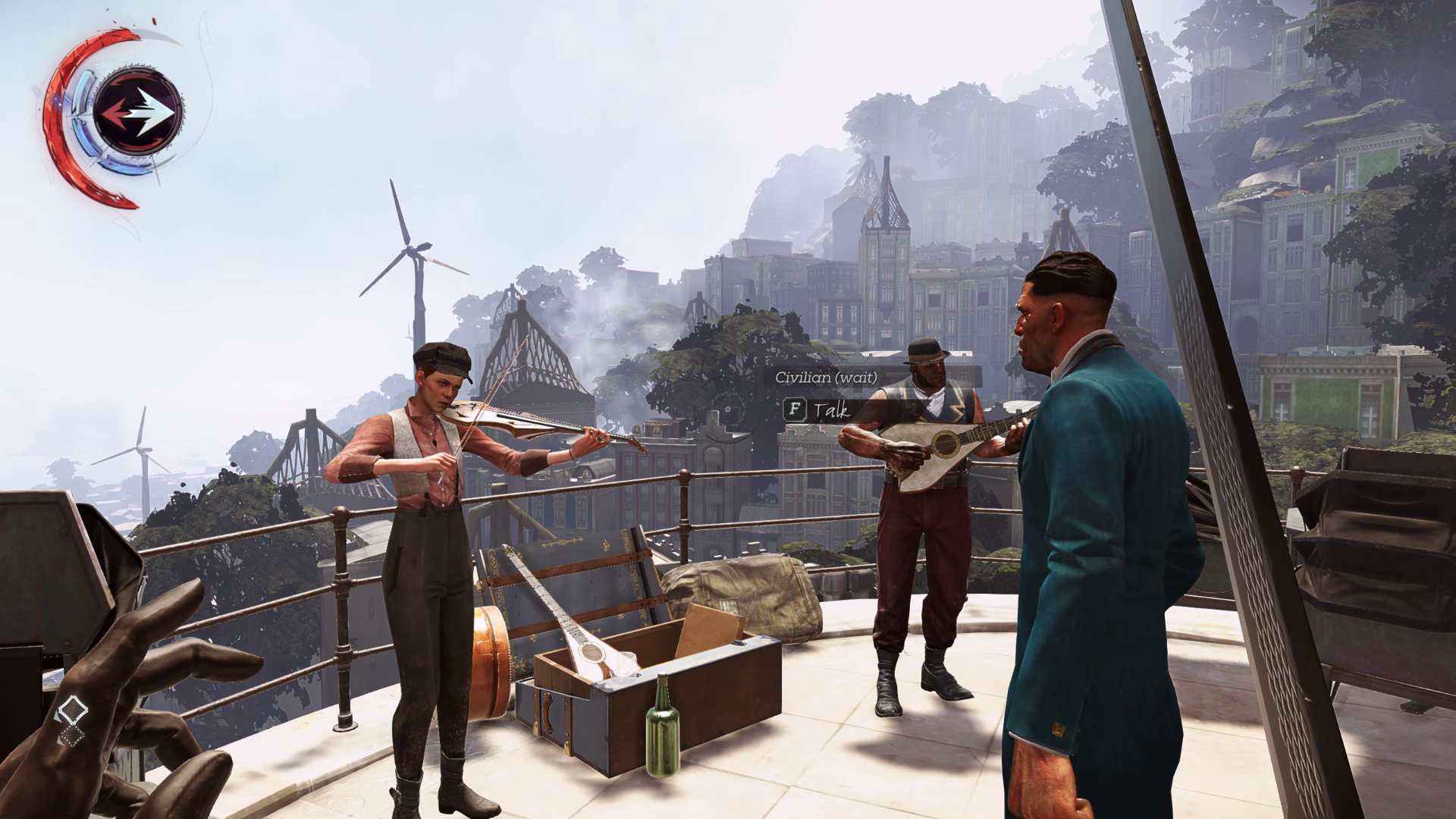 It’s the best level because it gives you the most options, each stage of the heist coming with its own set of challenges. When I play it, I decide to go in through the roof. I’m told that I can lower the bank’s security if I drop some sleeping concoction down a vent before entering, so, first, I go about stealing the supplies. Unfortunately, the pharmacy has been shut down and its stock is being sold at auction. Once I find the auction, I steal a noble’s face with Semblance and stash his body in a dark corner, before making my way inside as my mana drains. I’m greeted by a guard on the way in, his dialogue matching the face I’m wearing. It’s at this point that I realise my mana drains faster the quicker I move, only ceasing to diminish when I stop, and I’m almost completely out before I take a seat.

The auction begins and I manage to outbid the other nobles on the items, but I’m stuck, stood in the middle of this gathering, and with only a slither of mana left before my mask slips. Luckily, I have just enough left to slink around the back of the stage just out of sight, so I go there and wait for my mana to recover. I still need to gather my supplies, though, so I generate a copy of myself on a nearby balcony using Displace, and quickly switch to its position before heading back out into the streets to take the face of a guard. Once I have it, I just need to get to the bank and use a painter’s lift to reach the roof. The painter’s lift is out of whale oil and has no power, however, so I have to steal another guard’s face and power it up, grabbing a tank from the other side of the bank’s grounds and slowly strolling over as my fellow guards tip their hats. 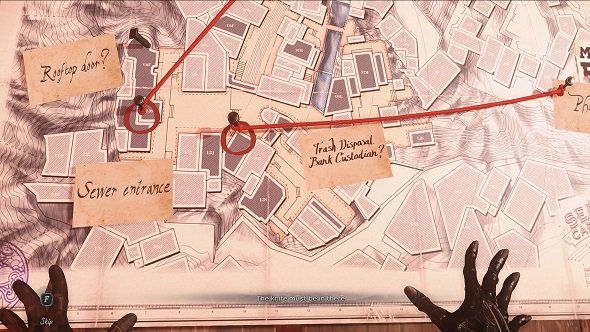 Once the concoction is down the chute, I head in via the rooftop entrance. Everyone is out like a light, but they can be woken up by noise. What follows is a tense 30 minutes of tiptoeing through the bank, taking care not to step on anyone or accidentally knock over any props, as well as avoiding the clockwork soldiers patrolling the most secure areas. When I finally activate the elevator vault, it wakes up everyone in the building with an alarm, and the intercom sends them my way. I’m still crouched, hiding, in the security room when the vault reaches the top floor – the voice on the intercom redirects the sentries, telling them to head to the vault, instead. I wait a few minutes as they scramble up after it, then push the button to send the vault back down to the bottom floor, Displacing my way down as quickly as possible, racing the guards. I get what I came for, then have to fight and sprint my way out. It’s frantic, exciting, and contains everything I love about Dishonored.

These same kinds of stories are generated in every level, particularly through Contracts – new optional side missions that can be accessed through each area’s black markets. Robbing those shops, like in Dishonored 2, unravels a story of its own, too. Contracts can completely change how you approach a mission, asking you to smuggle specific targets out of busy areas, tasking you with killing people and making it look like an accident, or even going as far as requesting you kill every person in a level except one. The game leans into Billie’s bloodlust and her disdain for a world that abandoned her to the streets. Displace into someone’s body and you can blow them into tiny chunks at the cost of some health, ripping them into pieces from the inside. Nobody will judge you for it, either – there won’t be any physical manifestations of your violence this time, just more corpses lining the streets. 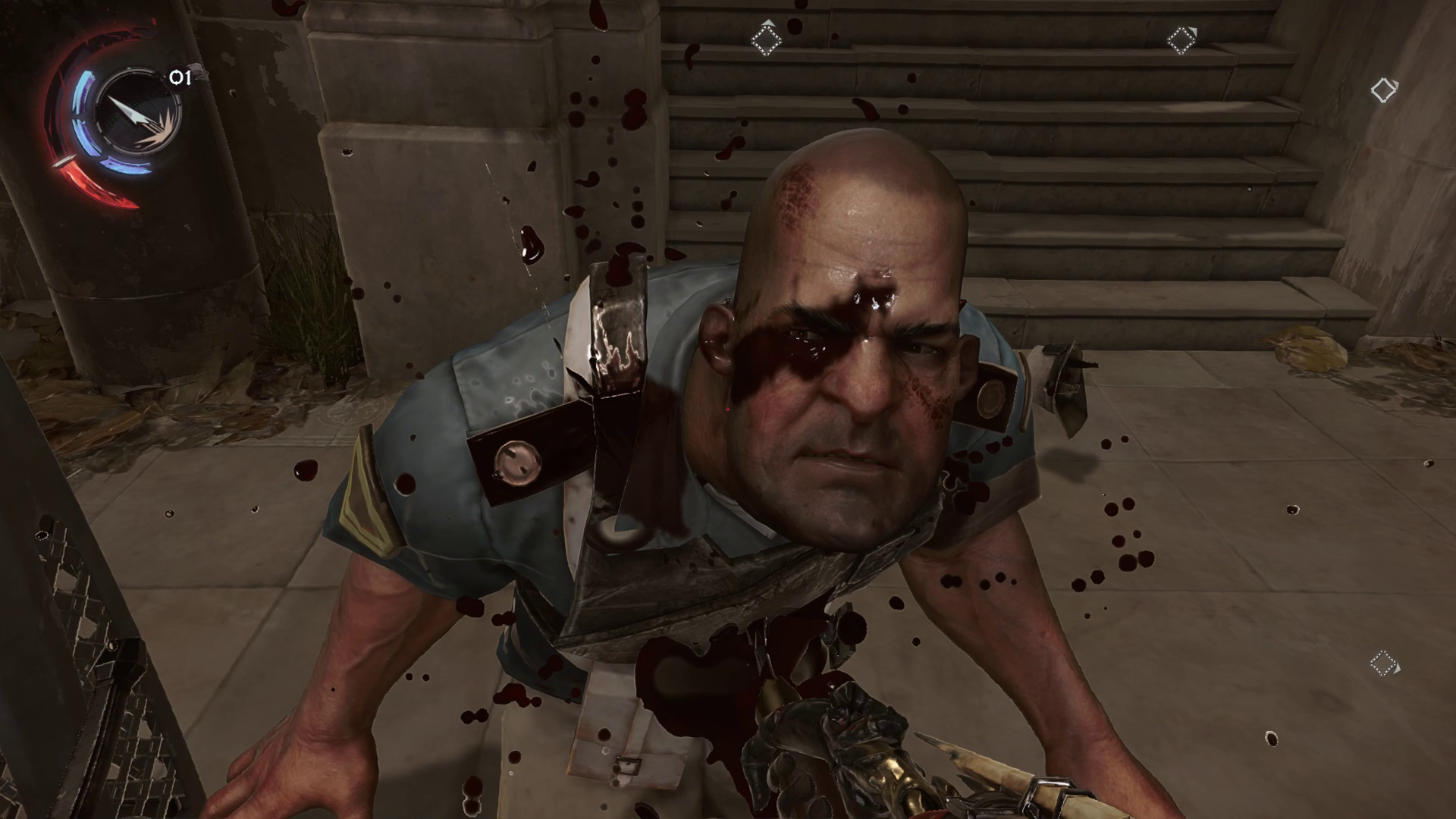 Dishonored: Death of the Outsider captures everything that’s great about Arkane’s assassination series, while also showing that it can still surprise. Smart tweaks improve the core gameplay and, if you’re worried about having fewer powers to play with, you can always go back through it with Corvo’s moveset when you’re done. As far as mission quality goes, it peaks in the middle – the fourth mission has us revisit a location from Dishonored 2, albeit slightly reworked, and the final mission feels much more linear than what’s come before. Still, it all leads to a satisfying conclusion that neatly ties up every plot strand that’s been hanging since that political assassination, whoever you decide is responsible.