Dishonored is Dunwall and Dunwall is Dishonored: never has a game been more inextricably tied to a fictional place. But when Arkane first conceived the game, Dishonored was to be set in medieval Japan. In a GDC talk entitled ‘World of Dishonored: Raising Dunwall’, Art Director Sebastien Mitton revealed that the idea was dropped because of the difficulties it presented in marketing, and because Arkane didn’t know the culture.

Arkane shifted their focus to 1660s London and the Great Plague – an era more familiar, and thus more marketable and relatable, to US and European audiences, early on in development.

From there, the team established a vision: beginning with 1660 architecture, the team wanted to infuse the winding streets and stacked, claustrophobic houses with the trappings of modern technology, as well evoke other eras. Mitton specifically referenced Soviet industrial cities.

Before they knew the details, Arkane knew that the game would be about contrasts: light and shadow, rich and poor, cold and hot. It was these dichotomies that decided Dishonored’s palette.

To feel out a style that combined the 17th century and the 20th, Arkane looked at painters from both eras. For London, they studied Italian landscape specialist Canaletto, Black Death sketch artist Gustave Doré, and Victorian painter John Atkinson Grimshaw, whose city night-scenes provided inspiration for Dishonored’s mood.

For the faces and the characters, the team looked to industrial painter Jean-Eugène Buland, and a tableau of a poor family talking to their doctor realised by fellow Parisian Dagnan-Bouveret. They took their palette from revered Polish painter Jacek Malczewski, and the notably stylized, readable look came from German Romanticist Carl Spitzweg. A certain amount of photographic influence also creeped into the game: Arkane looked at photos of Edwardian London for early 20th century technology, and at pictures of equipment being towed to the Eiffel tower. 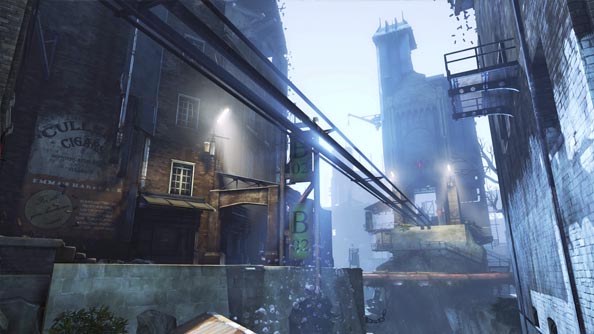 After their survey of photography, Arkane realised something readily apparent to Europeans – Londoners look very different to the French or Italians. They studied the characters of London to create the reference material for character design, and examined old mug shots from Edwardian London and Australia for reference for thugs.

But only so much of a place can be soaked up in an office, and so the team visited the UK on reference expeditions. “It’s not just going into a location and making photographs of textures,” said Mitton. “It’s to feel the city. To feel the location and the people.”

In London they took in the Jacobean architecture, and streets “like canyons” in their verticality. Arkane “didn’t want to tourist trip”. Instead they placed two points on the map and walked between them, from A to B, through the back streets.

London also provided a wealth of material for a contemporary kind of oppression. Arkane returned with heads full of surveillance, guard cabins, warning signs, and barriers. “It’s a sort of dystopia,” said Mitton. 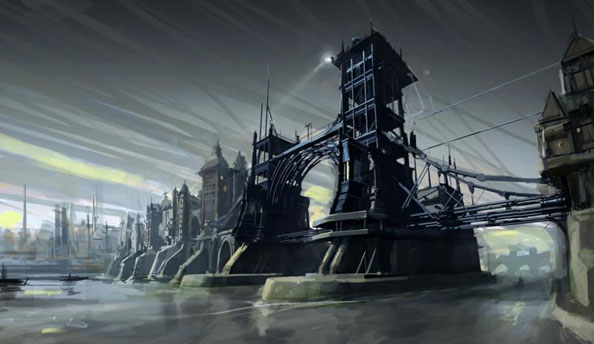 However, many of London’s 17th century streets were too heavily bombed during the Blitz to offer clear frame of reference. The team went to Edinburgh to explore the city streets in the dark, and there realised they were onto something unique. On the right night, Texan developers could be spotted testing the Scottish capital’s suitability for stealth – ducking into doorways to check whether the depth was capable of hiding a man. The team would then decamp to a bar somewhat reminiscent of the Hound Pits pub to talk and debrief.

Elsewhere, the team saw how harsh lighting can change the tone of a building. When they returned home, they created the concept of the ‘oppression light’ – the brutal, sharp relief of the arc lights used throughout the game to emphasise fortress-like edifices.

At some point Arkane actually grey-boxed London, integrating Dishonored architecture into real layouts to see if it fit the flow of the city. But eventually, Dunwall “started to fill itself”. 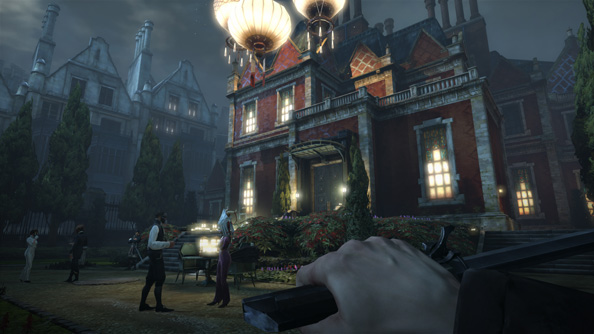 The talk revealed a number of other snippets about Dishonored art style. The team found that folds were important in clothing for creating a sense of weight and material. Totalitarian street blockers conveniently solved the eternal problem of invisible walls at level limits. The attack dogs – usually only ever seen for an instant by the player before a panicked blink took them as far away as physically possible – were assembled from equal parts giraffe, dog, and crocodile. And did you notice that there are no rivets in the game? All metal is bent; all brass fitted.

“Some people call this a steampunk game, but it’s not meant that way at all,” said Mitton.

The developers believe that Dishonored’s aesthetic success is a message waiting to be received by fellow developers. “Avoid photorealism. Understand what you are doing. You can bring all the texture you want, shoot all the photos you want. But it won’t produce the texture you’ll use in the game.”