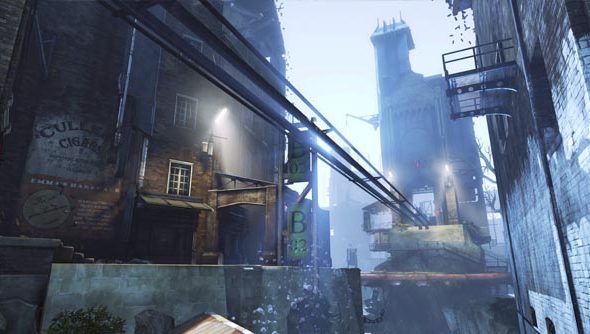 There are two reasons I’m excited to play Dunwall City Trials. Firstly, it puts me in mind of Mirror’s Edge’s Pure Time Trials DLC, an exposed-brick jungle gym created with the sole intent of pushing the game’s key mechanics to their limits – utterly abstracted, assembled by level designers with fingers still hot from the digit-treadmill of full production. Secondly, it’s a chance to play with Dishonored’s finer tools for wanton murder away from its moral scorekeeping.

At time of writing, it’s been out for two hours and neither you or I are playing it yet. What’s up with that?


Dunwall City Trials will test your mobility, creativity and murderous intent in equal measure. It’s made up of ten challenge maps, including an arena battle fought against waves of enemies, a “gravity-defying” series of drop assassinations, and an ambiguous “race against the clock”, say Bethesda.