Kickstarter has been a blessing for older PC gamers: it being the gateway where nostalgia for past experiences meets the necessary funding to refresh them with a touch of modern magic. That approach simply wasn’t good enough for Belgian developer Larian, though. Despite being a Kickstarter project that tugs at the heartstrings of classic RPG fans, Divinity: Original Sin 2 is a game that spends more time looking to the future than the past. The result is a game that appears to be an old-school throwback but is, in fact, probably the most ambitious RPG of the decade.

Julian’s game of the year is the challenging Opus Magnum.

Divinity can easily be compared to former RPG king, Ultima VII. Despite being caged in by simple graphics and the computing power of a boiled cabbage, Ultima VII created a world where it felt like anything was possible. That expansive feeling has diminished over generations of game design, but it returns in true form with Divinity: Original Sin 2. But, rather than feeling like Ultima, Divinity more closely resembles Dungeons & Dragons and tabletop gaming at large, and not just because it has a perfectly-formed game master mode.

While Original Sin 2 explores the Divinity lore with more reverence than its predecessor, the world of Rivellon is still offbeat and weird. Thus, it feels completely in-character to roleplay absurd situations, engage in battles where entire map zones are razed to the ground in cursed fire, and graffiti buildings with human-spun spider webs. My early hours involved having to force an undead skeleton companion to wear a bucket on his head, lest he be attacked by terrified citizens. I have also seen a video of the first major boss being defeated by repeatedly hitting him with his own portrait. A friend has adopted a tactic in which he makes one of his most vulnerable party members so smelly that enemies refuse to fight with them in close quarters. 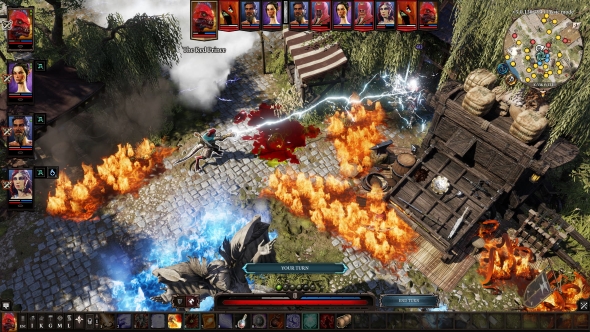 Divinity’s mechanics and world are so inventive and colourful that it turns Original Sin 2 into an anecdote machine. The last decade of RPG design has led to thousands of interesting conversations, but these have largely revolved around elements prescribed by the developers: important plot moments, grand cinematic set-pieces, or agonising binary moral choices. Conversations about Divinity are always about something surprising, smart, or silly, and based entirely on player choice or emergent happenstance. It is the sort of discussion I have typically only ever had about pen-and-paper RPGs, where adventures are free of the restraints forced by pre-coded rules and logic.

Given that developers Larian are independent and the project is funded through Kickstarter, you would think that this kind of creative gaming would have to come with compromise. Yet Original Sin 2 cuts no corners. It may be played from an isometric perspective, but its world is fully 3D and as densley detailed and lavishly produced as a CD Projekt RPG. Spell effects dazzle, the environment lives and breathes with weather effects, and the sound design is pitch-perfect. The real triumph, though, is in the voice work – the game is fully voice acted, with great performances across the board. From core quest givers to the most insignificant villager, everyone has something to say aloud, something worth listening to. While I have always celebrated text-rich RPGs (this year’s Torment was a beautiful, literary experience) I can’t deny just how exciting and alive Divinity feels thanks to its extensive voice-over work.

In a year that saw Mass Effect: Andromeda demonstrate that triple-A RPG development has stagnated to the point of practically being a checklist, Divinity: Original Sin 2 is a shining beacon for the genre. It proves grand role-playing games are not stuck for ideas, nor do they need the bottomless coffers of EA to produce something that feels truly premium.