The game director of Ubisoft’s most exciting upcoming open-world shooter has taken to Reddit to conduct an Ask Me Anything. Ryan Barnard has taken questions on all aspects of Tom Clancy’s The Division, from the decision to release on PC to offering players a truly unique story experience.

Back at E3, The Division was announced for next-gen consoles, but we were convinced a PC announcement was just around the corner. It was. “After E3 the incredible response that we got from you guys allowed us to go back and take a look at the PC question. We decided that it made sense for Massive to do a PC version at the same time,” said Barnard.

You’ll notice that Barnard says that the PC version will be in development at Massive “at the same time”. That’s right: we won’t be receiving a last-minute port from the console code. “We are approaching the PC version like we’re developing the game from the ground up,” explained Barnard. “It will not be a port and making sure the experience is just as compelling for the PC as the next-gen consoles is important for us.”

So we know that The Division will be on PC. But what else should we expect? Well, you’ll need a persistent internet connection. “From the beginning, The Division has been developed from the ground up to be an online experience. So you will need an active internet connection to play,” stated Barnard. We’re certainly in MMO territory, then. But despite sharing common ground with the genre, Ubisoft are looking to improve on elements that we’ve come to accept. Multiple servers are the first thing to go.

“What we want for The Division is for players around the world to be able to play with each other. The concept of a picking a “server” will be a thing of the past. So, to you, you will just log in and play,” explained Barnard. 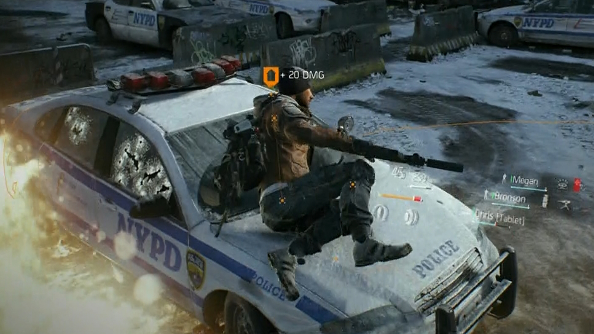 Other improvements the team behind The Division are looking to make on existing MMO games is the poor quality of end-game content. “We’re VERY aware that end game is where many games have failed to provide enough good content to keep people playing,” said Barnard. “So we’re making that we spend enough time pre-launch to make a very robust end game experience for The Division.”

Before we get to end-game though, we’ll have a core story to progress through. Barnard stresses that due to the online nature and open-world set-up of The Division, each player’s experience will be unique. “At the heart of the game is exploration and investigation so the main story is extremely important for us. How we want to deliver that story to you guys is a little bit different than what is done in many contemporary RPGs. We really want truly emergent content and story,” he explained.

So, what that basically means, is your story playing through The Division will possibly be different than my experience while still following the same major story arc for both of us.”

As expected, attempting to produce the mechanics that power this experience has been quite a task. Yet Barnard is proud of the work the design team has produced, and is clearly confident that they’re onto something special. “It was extremely challenging to combine elements of MMOs, ranged combat and group synergies. Thankfully, our design team is awesome and continues to save my butt over and over 🙂 But seriously, we’ve spent almost the better part of a year trying to get it right and we’ll continue to iterate upon it until the release of the game.”

The Division is due in the last quarter of 2014. There’s no word on concrete release dates yet, but keep all your fingers crossed and hold close your rabbit feet, since we don’t want Ubisoft to pull another ‘Console now, PC later’ release schedule on us. Not for this one.