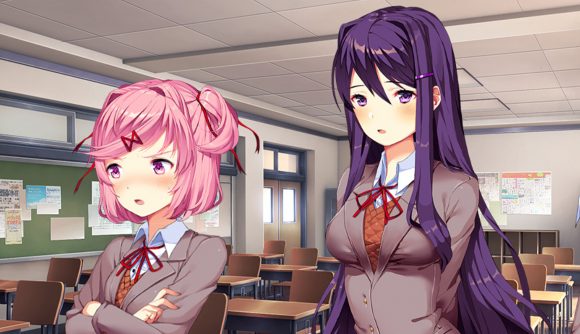 Doki Doki Literature Club was one of the most unexpected hits of 2017 – an apparently cutesy, freeware visual novel that comes with the ominous warning that “this game is not suitable for children or those who are easily disturbed.” The bizarre twists and the memes that followed have been etched into internet history, and it seems we haven’t seen the last of Monika and the gang.

New Doki Doki Literature Club content is set to launch this year, according to creator Dan Salvato. The only additional detail we’ve got is that this release will not be a sequel – it looks like some form of DDLC DLC is coming, though since the original game is free it would not be surprising to see the update follow suit.

Last year, Salvato offered IGN the tiniest of hints on what to expect from a potential DDLC update: “All I know is that I would like to do things that appeal to people who are fans of DDLC and the characters. Things that would help them get to know the characters a little bit more, or more content along those lines.”

After the DDLC content launches, Salvato will be “blowing the dust off my next original visual novel which has been on hold for two years.”

This will be the year I reclaim my happiness so I can deliver it to others! My goal is to fully return to doing things I enjoy, such as making games. First releasing new DDLC content (not a sequel), then blowing the dust off my next original VN which has been on hold for 2 years.

Given the popularity of DDLC, whatever Salvato makes next will be one to watch closely – even if it’s unlikely to match the sudden success of its predecessor.