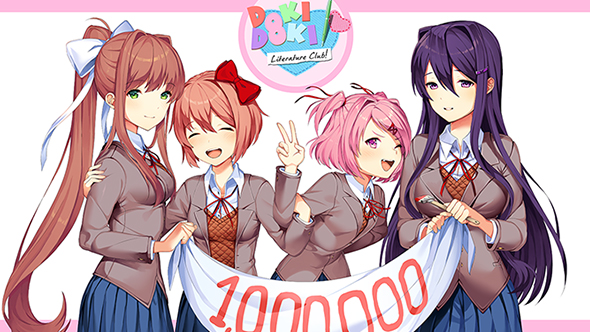 Doki Doki Literature Club doesn’t do much to stand out on the Steam store. It looks like yet another cutesy, low-budget visual novel, and one without the overflowing sex appeal of many competitors. Nah, this is just another dating sim by another set of Western developers eager to take on the tropes of cute anime girls.

Check out all the best free games on PC.

The only clue as to why people will tell you in hushed tones that you need to play Doki Doki Literature Club is a warning on the store page, saying “this game is not suitable for children or those who are easily disturbed.”

You either already know the direction this game goes or you should play it yourself to find out. Either way, DDLC has become something of an internet phenomenon, aided along by the fact that it’s completely free on Steam, supported only by the optional purchase of a package including the soundtrack and some art.

How popular is it? It’s now surpassed 1 million downloads. It’s impressive for any game to reach a milestone like that, even with the caveat of “it’s free.”

Developer Dan Salvato is keeping a sense of humor about the free game’s popularity. On the Team Salvato blog, he says “It’s only just now I’ve realized that nothing I’ve ever done in my life has had greater reach and popularity than a romance game with cute anime girls.” In fairness, it’s tough to compete with cute anime girls. Or, y’know, the characters of Doki Doki Literature club.