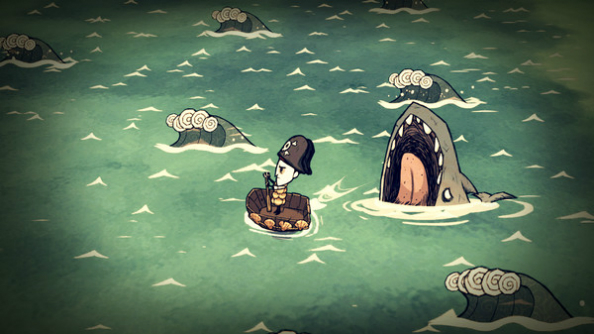 Lord, I’m getting peckish. Don’t Starve: Shipwrecked hit Steam Early Access this past December, stranding the ever ravenous Wilson on a desert island. To help keep your hunger pangs at bay, developer Klei Entertainment has recently published a roadmap, outlining upcoming content for the adorable survival sim on its official forums.

Shipwrecked is cheap, but you know what’s even cheaper than cheap? That’s right, free! Have a gander at the best free PC games.

Writing to the community, designer Bryce Doig gave Don’t Starve fans a little taster of to what to expect from Shipwrecked over the next couple of months. Best get ready to build up an appetite for new characters, additional bosses and balance tweaks.

Fresh content will scamper its way into Shipwrecked roughly every three weeks starting in mid-January; these updates will then continue until the end of February. After that point, the studio will focus solely on fixing bugs and balance changes.

“In the December 17th update we released Walani, but we still have three more characters to go,” writes Doig. You can also look forward to new beasties who’ll be looking to devour your survivor when extra bosses are introduced to the game. “The world in Shipwrecked has a noticeable absence of large creatures,” says Doig. “Right now, we have three new bosses planned for Shipwrecked: the Tiger Shark and two other yet to be named horrors.”And here I was thinking it was safe to get back in the water.

As for balance changes, Doig promises these will have the biggest impact on your hungry, hungry experience. “We are aware that there are many balance changes that need to be made and we will be tackling them during these updates by turning the dials behind the scenes and adding additional content to help deal with the new challenges in Shipwrecked,” notes Doig.

The designer also admits your feedback on tweaking these systems going forward will be “worth its weight in gold.” Expect further balance changes to certain on environmental features, like volcano eruptions and floods. In line with this, Shipwrecked’s world will also evolve according to Doig. “… there is another biome that will be added to the game. We’re also going to be making more specific set pieces and world items to make the world feel even more like a deadly tropical archipelago.”

Finally, Doig also promises the studio are actively working on letting you you move back and forth between Shipwrecked’s worlds and that of the original game and previous expansion Reign of Giants. “The transition will function similar to how caves work. Clicking on the portal will unload one world and load the next, transporting you and the items you’re carrying between worlds. This should be expected towards the end of the updates.”

All this talk of survival, remote islands and Wilson has me craving both a sizable dinner and a beachball best pal. You can buy Don’t Starve: Shipwrecked on Steam now for £3.99/$4.99