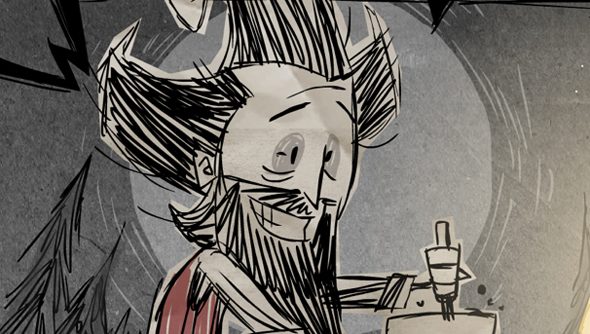 Perhaps starvation isn’t so bad with friends. Maybe one chum can tap out a tune on the xylophonic ribcage of another.

A select group of Don’t Starve players are going to find out within the next month. That’s the timeframe Klei have given themselves to push multiplayer update-cum-sequel Don’t Starve Together into closed beta – just as they sneak Invisible Inc. onto Steam Early Access.

Klei had intended to get the closed beta out by the end of the summer – and in yesterday’s AMA told fans that they’re “on track to hit that deadline”.

“Technically, summer doesn’t end until September 23 :P,” wrote designer Seth Rosen. “We’re aiming to get it into the hands of the first closed beta testers before that date.”

Don’t Starve Together will be made available as a free update to owners of Don’t Starve, though that’ll likely happen after the multiplayer game gets its own, standalone Steam release (“updating builds on Steam is much easier”).

Development of Together has seen Klei tackling constraints baked into Don’t Starve’s bones.

“Outside of just making the game function over the network, a lot of the difficulties have come from trying to answer questions like, ‘What happens if a player goes to sleep but there are other players in the server?’,” said Rosen.

“In Don’t Starve, when you sleep, the screen fades to black and the clock jumps ahead a bit. When you’ve got other players doing non-sleeping things, you can’t do that!”

Klei wouldn’t be drawn on details of the series’ future – though studio founder Jamie Cheng said we could expect updates for “some time to come”.

“We weren’t even necessarily planning on making [expansion] Reign of Giants before we were close to wrapping up Don’t Starve!,” added Rosen. “So, for now, all I can say is that we’re working on Don’t Starve Together.”

Do you think you’ll return to Klei’s Steam survival smash with a friend or three?