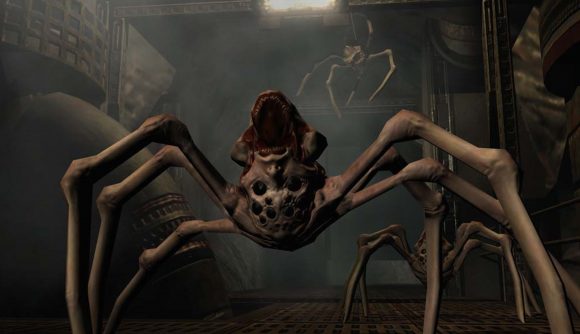 You can now rip and tear your way through Doom 3 in VR if you fancy it. The old PC game has been rejigged for the wireless VR headset Oculus Quest 1 and 2 by prolific modder DrBeef. Doom has always excelled in demon-busting combat, but the added prospect of VR makes the experience feel all the eerier. I, a coward, do not like the idea of taking on a spider with an upside-down head in VR, but you might be braver than I.

The fan-made port is called Doom3Quest, and comes with more than 12 hours of campaign content alongside updated graphics. You can also expect fully tracked VR weapons and VR UI touchscreen interaction, among other things, to make the experience worthwhile on your Oculus Quest. You can only play the single-player right now, but the team behind the port is open to the possibility of looking into multiplayer at a later date.

If you fancy giving Doom3Quest a go yourself, you’ll need a copy of the original game and a third-party app called SideQuest. The desktop app is designed to simplify sideloading apps and games on Oculus Quest and Quest 2, so it’s recommended you go with that. You can find more information on how to install the port over on the Doom3Quest website.

You can catch the trailer below to see it in action:

The Doom 3 port team has some form with putting a VR spin on things, giving Half-Life and Return to Castle Wolfenstein a similar treatment previously. If you fancy trying something else in VR, though, then our best VR games for PC has plenty of fine picks for you.