Bethesda’s gun-slinging, blood-spurting, arm-ripping adventure Doom is getting the full VR treatment this December. Excited? Good. But first you should know that the graphical requirements of this demonic trip across Mars require far more than just your run-of-the-mill components.

Want to turbo boost your rig? Here are the best graphics cards around.

There’s a chance that DOOM VFR will make you throw up. It might be because your delicate disposition can’t handle all the blood, limbs, and gore that Doom launches at you at all times, But it’s not just that: due to the demanding engine that runs all the hellspawn, it might actually be that your graphics card simply can’t keep up and gives you a less-than-smooth VR experience.

The minimum specs are at least a little more forgiving, requiring at least an Intel Broadwell i5 or AMD FX 8350; 8GB of memory; and either Nvidia’s GTX 1070, or AMD Radeon RX 480 graphics card. Virtual reality is, as you might expect, far more demanding than it’s non-VR counterpart. Don’t assume that just because you can run DOOM, that you can run DOOM VFR. Ye’ have been warned. 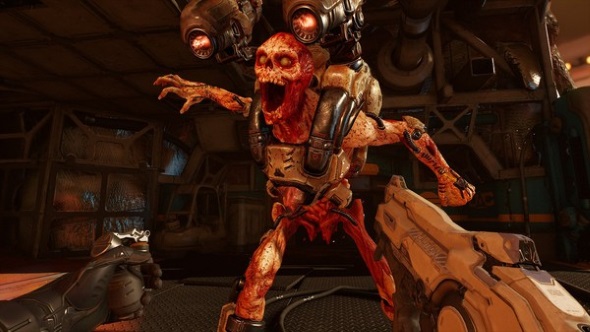 Hopefully these specs are gratuitous and not entirely necessary as a GTX 1070 should be a little more than ‘minimum’ when it comes to virtual reality performance. If not, we might see a whole wave of ‘VR Ready’ laptops get their rear end handed to them by Doom VFR.

It’s no surprise that a virtual reality game is pretty demanding on your render-happy components. However, in the past, an Nvidia GTX 1060 or AMD RX 480 has been plenty powerful enough to drive a smooth experience to your VR goggles. It will be interesting to see if AMD’s proclivity for Doom will continue into the virtual reality title.

Doom VFR releases tomorrow exclusively for the HTC Vive on Steam. Hopefully the launch will accompany a resounding sigh of relief from thousands of ‘VR-ready’ graphics cards owners who haven’t been left in the dust quite yet.

Check to see if your system is capable using the widget below.