VR has a reputation for making players eject their half-digested breakfast over the walls. For that reason, it is easy to be perplexed by Bethesda’s decision to turn 2016’s lightning-paced Doom into a VR game. But as I roll a grenade into a crowd of Imps, fire buckshot into a Hell Knight, and then teleport into a Revenant to reduce it to a shower of viscera, I realise exactly why developers id Software would want to make this. It is the ultimate rampage power fantasy.

Well, until you try to move that is.

Explore a whole new dimension in the best VR games.

Movement in virtual reality is not a problem exclusive to Doom. Every team making titles on the platform that are meant to replicate more traditional videogame experiences are attempting to solve the same problem. The solution in Doom VFR is a combination of systems you have seen before – holding the Vive’s trackpad slows time to a crawl and places a marker in the world, to which you will be teleported when releasing the button. For shorter distances, using the trackpad like a d-pad will allow you to take a step in the required direction.

The theory is sound, but take a moment to consider how you play Doom. It is a game played as if mounted on rollerblades. You might as well be traversing surfaces that have been liberally applied with Johnson’s baby oil. VFR is a slower-paced version of the formula, but it still relies on assaulting you from all directions with a variety of enemy types. The stop-start nature of teleportation fragments the action, and the d-pad strafing is disorienting. 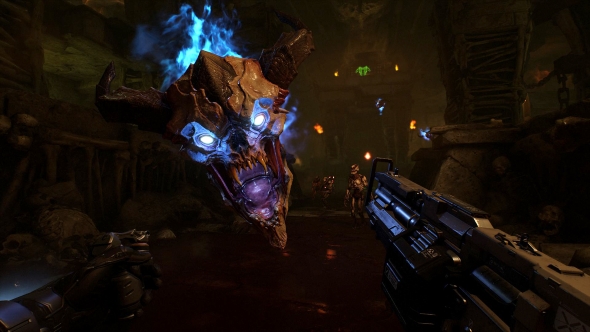 Despite being on HTC Vive, Doom VFR doesn’t support room-scale VR, and so your instinctive side steps to dodge incoming fire and demonic lunges do nothing to help. You quickly find that your brain knows exactly what to do, but the fumbling nature of the controls mean that it is difficult to execute your plan before being reduced to squirming red chunks.

Oddly enough, this futuristic and transportative version of Doom mostly reminded me of the distant past. Trying to play the original breed of FPS, such as Wolfenstein 3D, feels unnatural and clunky these days thanks to our acclimatisation to shooters that allow astonishing levels of freedom. Doom VFR evokes that feeling of frustration, albeit in an environment that manages to frequently dazzle you.

Technically speaking, it is the best VR game I have played to date. It looks exactly like Doom. That may seem an overly simple point to make, but I expected a compromise in order to produce the power-intensive stereoscopic effect that VR requires. Instead, the Mars base looks crisp and grotesquely beautiful; it is the closest I am happy to get to gore-drenched workbenches. And while it may not have the convincing sense of scale that many VR games have, the Cacodemons feel unnervingly huge and successfully terrify when they get up close. 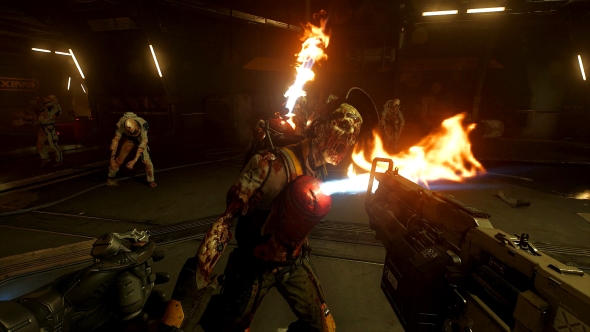 There is a lot to like about Doom VFR. While the shooting lacks weight and proper feedback – something you would hope for from a VR game – it is indisputably fun, and the novelty of being able to literally bowl a grenade with your off-hand never wears thin. Although the game is somewhat simplified, with the combat frequently punctuated by quiet exploration that is easier to navigate, it is unmistakably Doom.

There is certainly something to be said about the fact that id Software managed to do that. But this iteration of Doom feels stuck between the glorious future of VR – a time when we play games exactly like we do with mouse and keyboard, but in virtual reality – and the 1990s, when DOS shooters barely supported a single axis and movement was restricted to four directions.

The vision is there, though, so surely it is just a matter of time before someone discovers a way to take a chainsaw to the limitations of VR like you might the arms of a Baron of Hell as it grasps your throat.