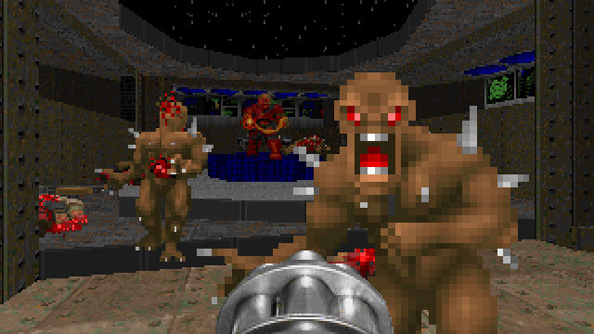 The original Dooms can claim lots of firsts: not just as shooters, or as the games that proved Windows as a gaming platform – but also as ground zero of the first PC modding boom (and for that matter, the first paid-for modding controversy).

Ty Halderman had a front seat for that show, as one of the modders whose work was assembled by John Romero for release in 1996’s Final Doom. Halderman died at the end of July this year after a brief battle with brain cancer – and left a community in mourning.

Halderman, 69, was admitted to hospital in early April after a brain tumour resulted in four seizures. In the following months he had “good and bad days”, but complications arose and he never improved – passing away on July 31st surrounded by family.

A close relative, who discovered Doomworld and its community of concerned fans through Google, reported the news there at the weekend.

“It has meant a lot to read all of the posts by people concerned with his health,” they wrote. “I wish I had gotten here sooner, so I could’ve helped, but I also always thought he’d get better enough to get back to his computer, or at least online at all. Brain cancer sucks.”

Halderman worked on TNT: Evilution, the 32-level mod that formed a full half of Final Doom. The mod was never released for free – but you can still peruse its dense and devilish interiors on Steam today.

He went on to program Boom, the source port that’s formed the basis of many Doom WADs since. And from 1998, Halderman maintained the idgames archive for Doom levels and toolkits. It was the halt in updates on idgames that alerted Doomworld to the fact that something was wrong.

“Ty Halderman was not called an ‘essential pillar of the community’ for nothing,” wrote Doomworld in their tribute. “The work he did for this community is immeasurable, and his loss devastating. We offer our condolences to Ty Halderman’s family, and would like to thank him for his efforts in keeping the central archive of the Doom community alive. He will be missed by us all.”