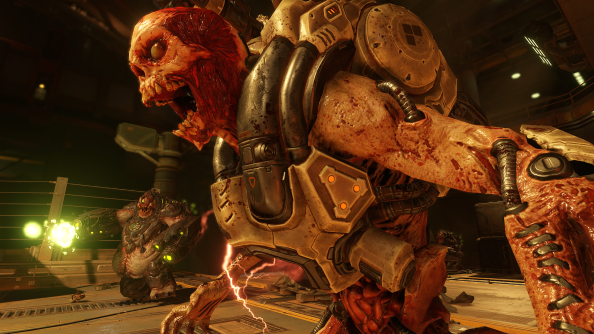 In a shockingly prejudiced display of ignorance, a pro-European Union Twitter account has labelled students ‘morons’ for daring to stay at home and play phenomenal shooter Doom instead of parading the streets of Britain and spreading the pro-EU message.

This is clearly not Super Serious News. If you didn’t come here for such frivolous nonsense, why not check out our homepage for the best real PC games news?

The offending Tweet from InForBritian can be seen below, should you have the stomach to view it. Quite frankly it’s the most sickening thing we’ve seen all week, and that’s coming from a team that’s been tearing the heads off demons for fun.

STUDENTS: Don't play Doom all day like morons. Go out and tell people they face doom if they're not in EU! #UKinEU pic.twitter.com/hc97xck6s9

InForBritain support the idea of Britain remaining part of the European Union, which apparently hinges on a number of people in full-time education playing a videogame or not. Since the anti-EU Brexit campaign has yet to insult gamers directly, it’s primed to see a groundswell of support from people who’ve been spending all week shooting demons.

People on Twitter have been outraged, posting aggressive and upset tweets expressing their digust for InForBritain’s archaic stance on the institution that is Gaming.

I would suggest everyone goes out and plays DOOM like a moron. You'll have a great day. https://t.co/CqHrBiI204

@InForBritain do you realize how many people you've probably just offended?

Hopefully InForBritain will withdraw their scandalous tweet before the day ends. If they do, then perhaps we’ll reconsider our stance.