Steam numbers! They’re a tricky thing. All we know for sure is that FPS juggernaut Counter-Strike: Global Offensive and money-printing MOBA Dota 2 duke it out at the top. In general, it’s assumed Dota 2 is the larger game, generally taking the top spot with a more active and larger player-base, not least because it’s free. Some new data from SteamSpy suggests otherwise.

If you’re planning the switch from CS:GO to Dota 2, here’s the best heroes for beginners.

In a pair of tweets last night, man-behind-the-numbers Sergey Galyonkin said that in the past two weeks, CS:GO had a larger ‘audience’ in total.

In the first two weeks of January CS: GO overtook Dota 2 on Steam as the game with the biggest biweekly audience: 8.12M vs 8.04M

Dota's audience is more engaged: they play more often and longer on average. But CS: GO is overtaking Dota 2 by number of active players.

By audience, he’s referring to the figures on his own site, which you can see for Dota 2here and CS:GOhere. It’s done by unique Steam IDs loading either game and on specific days Dota 2 has been the lower. With his own provided margin for error, either game could be on the top spot most of the time. As he said, Dota 2’s playtime is much higher, probably due to the length of games even in more casual modes.

However, saying CS:GO is the bigger game by active players might be a bit of a stretch. SteamCharts, which pulls user numbers from Steam’s stat page,tells a rather different story. Comparing the Dota 2 page to CS:GO’s isn’t particularly close, by peak, average or any other stat you might wish for. In fact, if you love fun with numbers as much as I do, you’ll be fascinated to know that the last time Dota 2 had a peak monthly player count as low as CS:GO’s highest ever was August 2014. 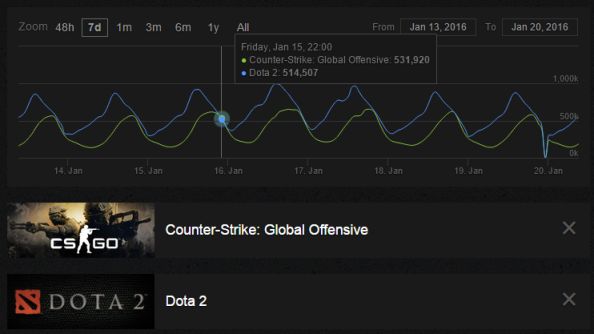 The FPS is growing quickly though, and this could be the first indication of a shift. SteamSpy has used a slightly arbitary period, but it’s clear to see CS:GO iscatching upacross a wider timescale. The different peak times for each game mean the concurrent player lines can get very close, and at exactly the right point CS:GO has taken over once or twice for roughly an hour in the past month.

As I type this, there are 350k more players logged into Dota 2 than CS:GO. A bigger game? No. Making a run at it? For sure.