Over the last couple of years Dota 2 and Counter-Strike: Global Offensive have exploded, stealing the two top spots on Steam’s most played list, and remaining there as if steel-pinned into concrete blocks. It’s difficult to think of anything that could replace them.

But something more interesting is happening. The number of people playing Dota 2 and CS:GO is growing at such a rate that they threaten to become bigger than every other game on Steam combined. We spoke to James Gray of SteamCharts.com to see what’s going on. 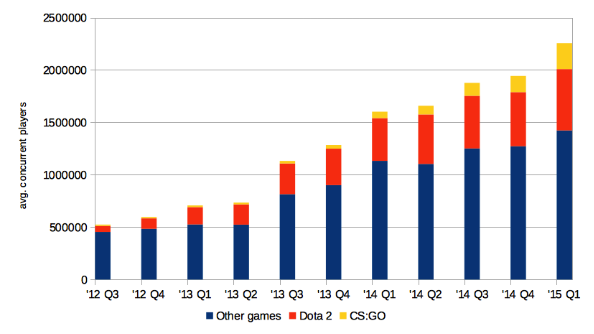 Take a look at this graph that James made for us. It shows the average amount of concurrent players on Steam, and is broken down into three elements: the yellow section is CS:GO players, the orange section is Dota 2 players, and the blue section is people playing any other game on Steam. Right now, in Quarter 1 of 2015, you can see that just Dota 2 and GS:GO make up around a third of all games being played on Steam. Dota 2 itself is seeing, on average, 585,719 players at any one time. In Quarter 3 of 2012, Steam had an average of 523,897 concurrent players across all its games.

To clarify: Dota 2 alone is now bigger than Steam was in its entirety in the third quarter of 2012.

Obviously the whole Steam user base has been growing over the last two years, and there are hundreds of thousands of other people enjoying an expanding library of games that aren’t Dota 2 or Counter-Strike; 1,423,021 players on average. But it’s difficult to ignore than an ever-increasing percentage of Steam is becoming wholly dedicated to just two games. 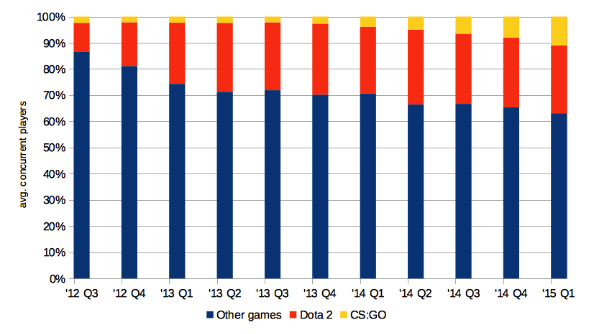 This second graph perfectly encapsulates this, showing that – regardless of actual number of players – the percentage of Steam’s overall users is tipping closer and closer to being dominated by Counter-Strike and Dota 2. And when you consider that the games in the blue section of the column consist of thousands more games in 2015 than in 2012, that’s quite an incredible feat. Despite there being more choice than ever, more and more people continue to decide that their time is best spent playing CS:GO or Dota.

Thanks to the rapid increase of Steam users, there’s enough people playing other games to prevent Dota 2 and CS:GO eclipsing them. But Steam’s astonishing overall growth can certainly be partially attributed to these games’ increasing popularity. In just over two years Counter-Strike’s player base has increased almost twenty-fold, from 12,585 players in 2012 to 246,870 in 2015. Dota 2’s growth is just about half as rapid, but its player base is twice as massive: swelling from 57,625 average concurrent players in 2012 to 585,719 players in 2015. Dota 2 being free-to-play and relatively undemanding means a vast amount of people are able to easily play it, and it would be unsurprising if it were to be revealed than many players simply signed up to Steam to solely play Dota 2.

These graphs show a distinct pattern: each year, Dota 2 and Counter-Strike: Global Offensive grow. There’s nothing to suggest that this trend is going to stop anytime soon. If almost 40% of all players on Steam are playing just two games, surely it can’t be long until these games command 50%. Considering both are Valve games, that would be a heck of an achievement for Gabe Newell and his company.

If figures are your kind of thing, head over to SteamCharts.com to see how many people are playing your favourite Steam games.